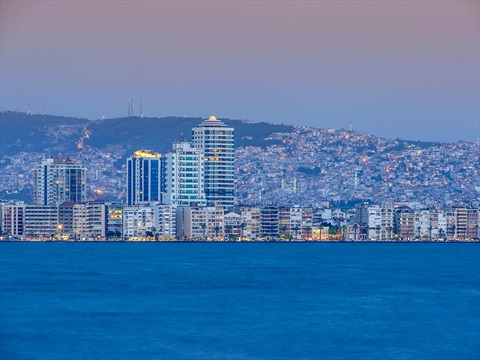 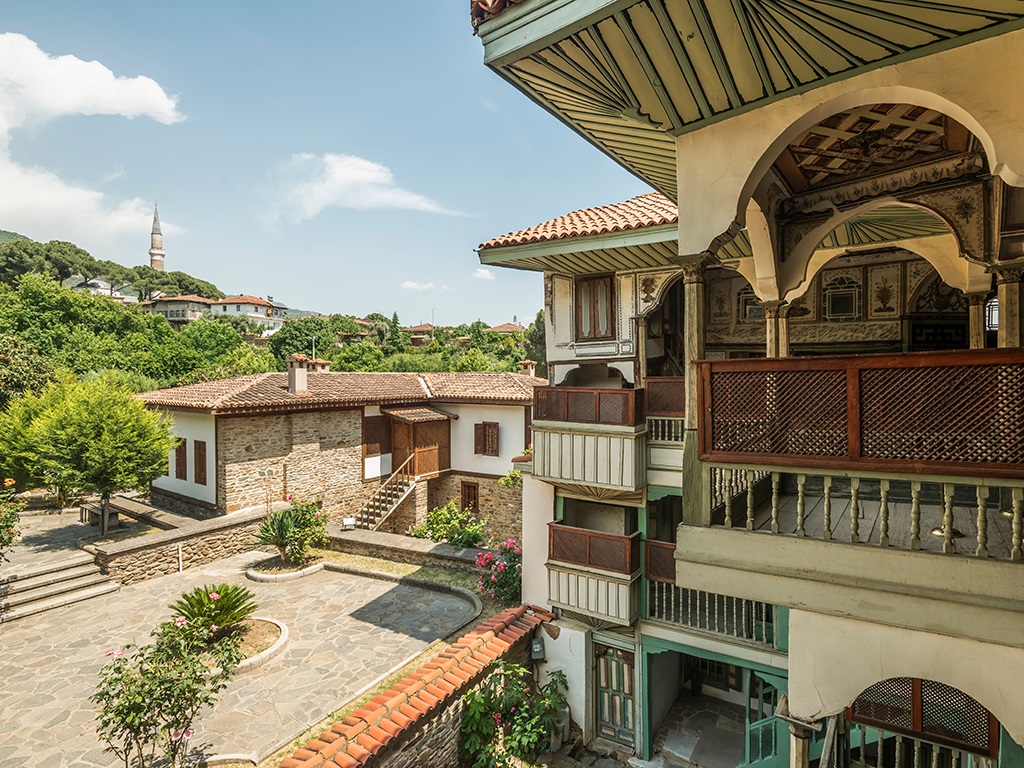 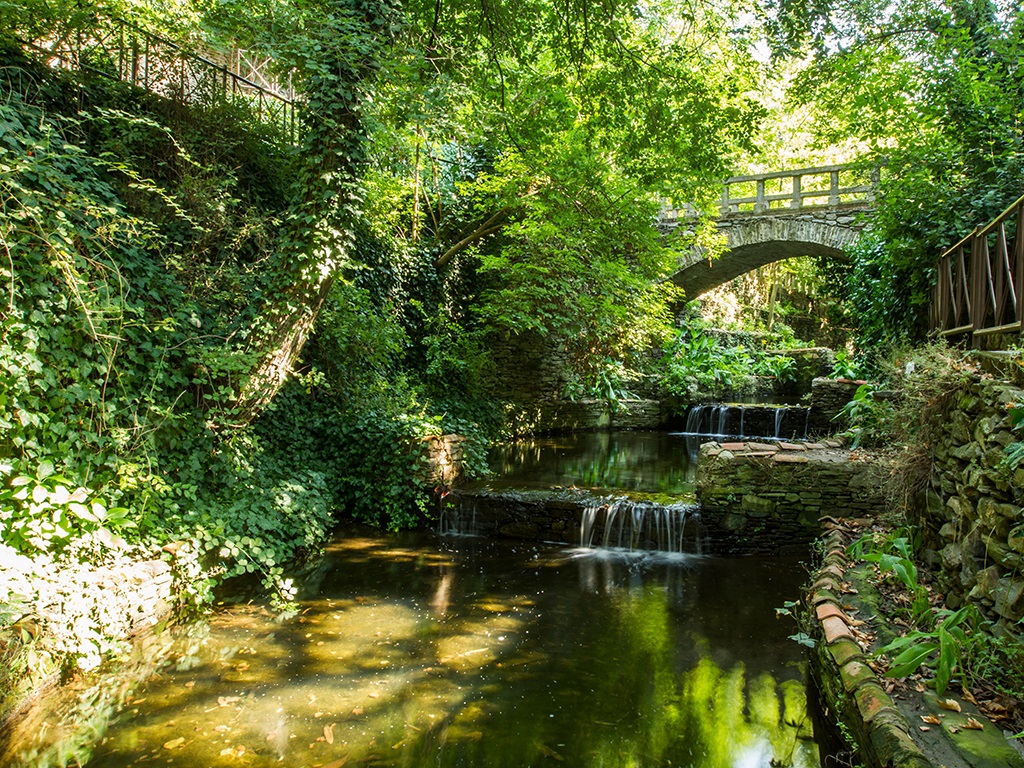 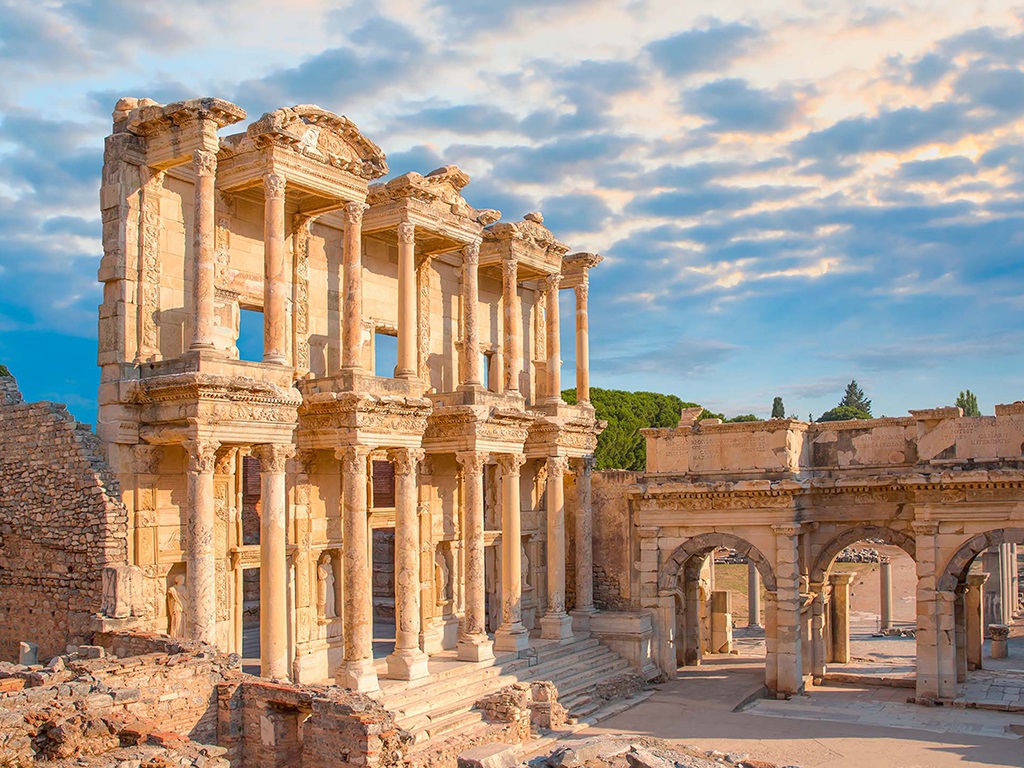 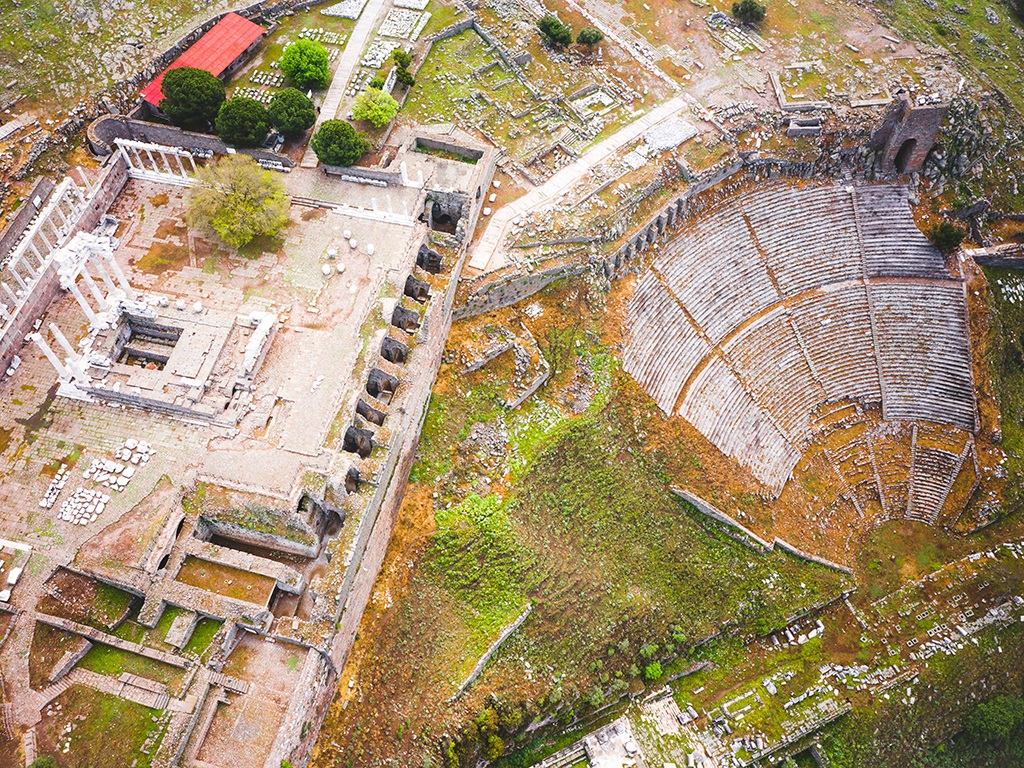 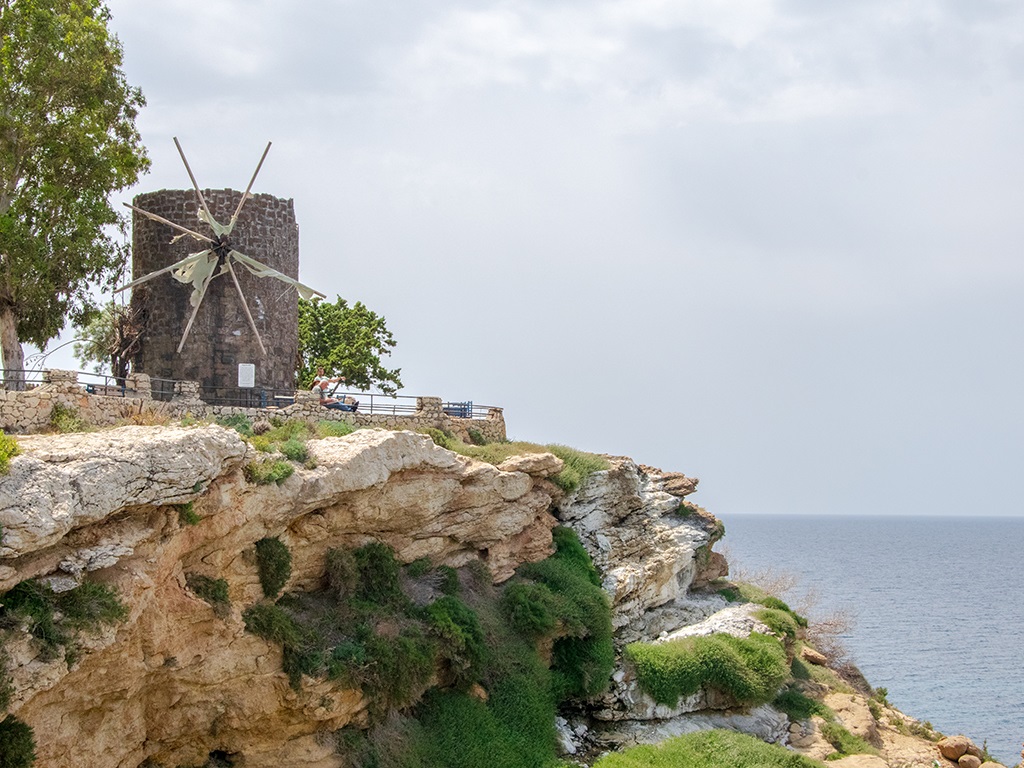 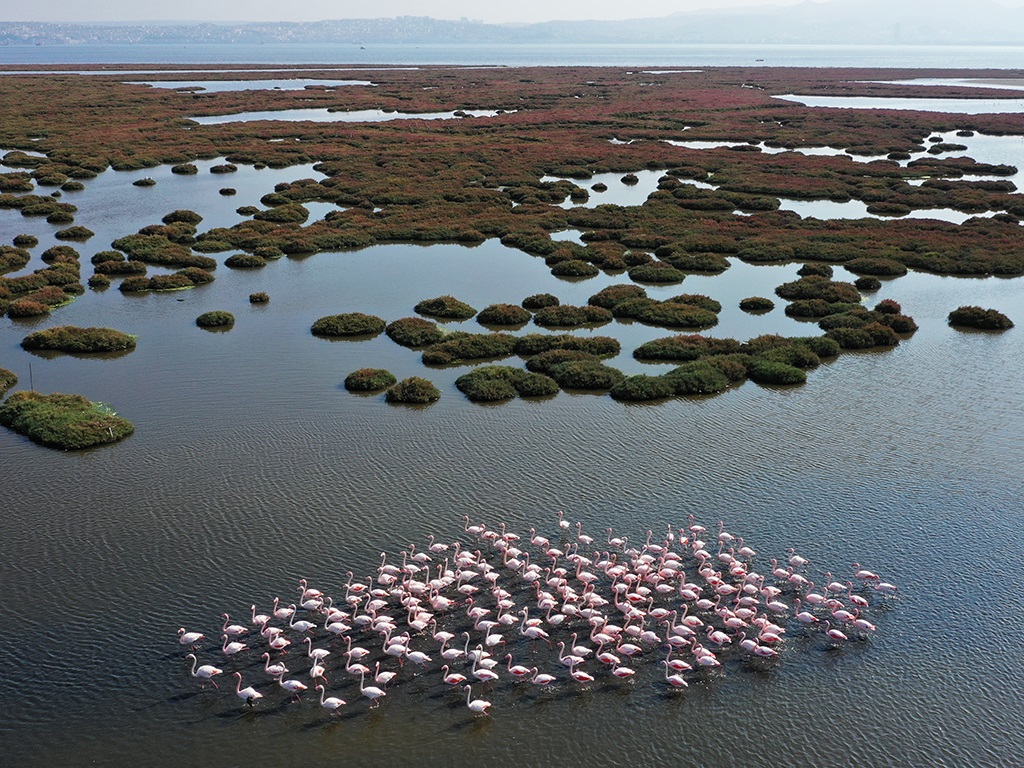 İzmir is among the most popular destinations for a holiday of sea, sand and sun. On the other hand, its ancient past appeals to archaeology enthusiasts while its streets, lively around the clock, await the explorers of the modern city. 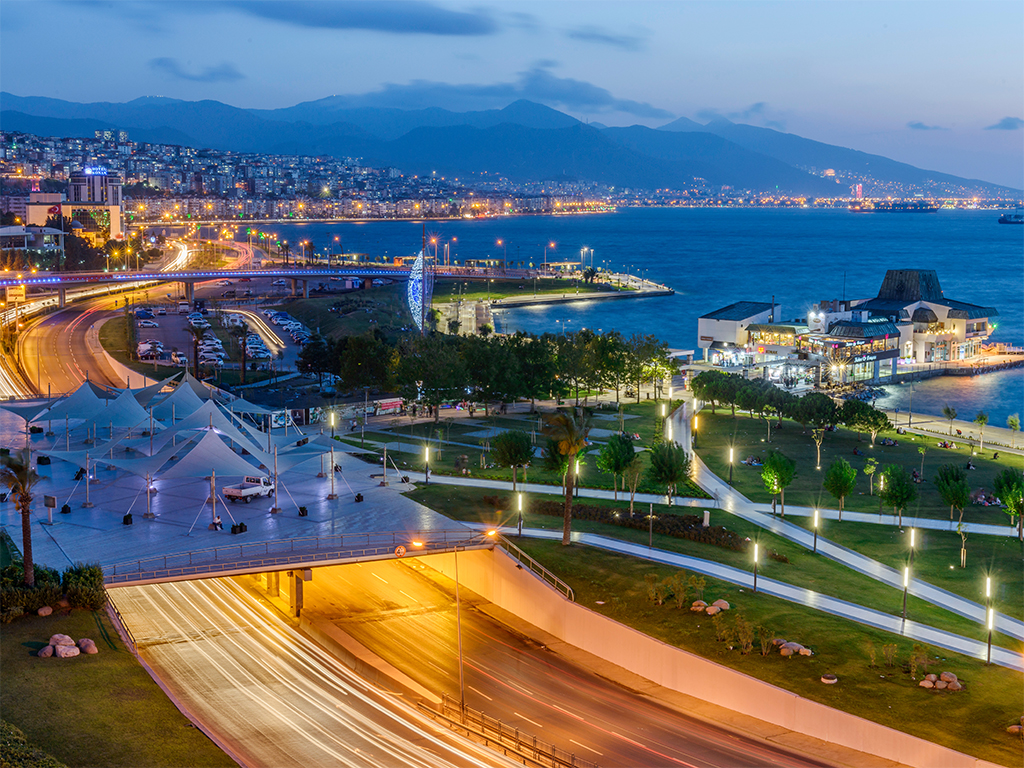 Konak has been the center of İzmir throughout history. There are many historical bazaars, inns, hotels, architectural heritage and monuments in Konak. Located in the center of the city, the Agora open-air museum is the most telling evidence of İzmir's multi-layered history. At Konak Square, there are the Yali Mosque- equipped with Kütahya tiles, Clock Tower, the City Hall, the Government House, the National Library and Historical Kemeraltı Bazaar. Tarihi Asansör (Historical Elevator), which also gave its name to the surrounding district, is one of the main landmarks that should be seen in the city center. It was built in 1907 by Nesim Levi to facilitate pedestrian traffic, connecting two streets at different topographic levels. Basmane, the historical district of the city, takes its name from a printing factory set up here in the eighteenth century. Basmane attracts attention for its architectural heritage such as stone streets, where İzmir's old bay windowed houses are located, alongside mosques, the Ayavukla Church, Basmane Station and Dönertaş Public Fountain. The building of the station in Basmane has been in service since 1866. 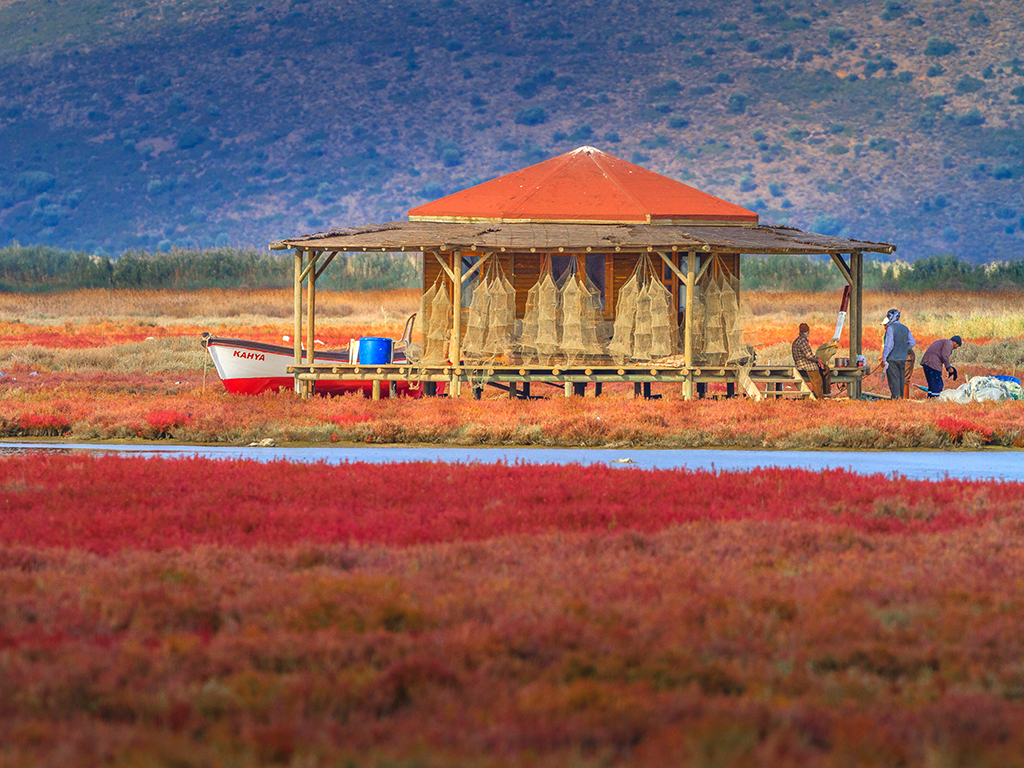 İzmir, a Mediterranean city, has almost all variety of flora from the Eastern Mediterranean region. İzmir is home to a variety of ecological habitats such as forests, wetlands, marine and coastal ecosystems. Three stream basins of Western Anatolia - Bakırçay, Gediz and Küçük Menderes are flowing in to the sea from within the borders of İzmir province. Forests cover approximately 40 percent of the city and where forests end, the flora turns into maquis shrubland.

Although İzmir has a mild Mediterranean climate, it is also home to high mountains up to 2000 meters. Around the Bozdağ Mountain range, there is a Büyük Çavdar Ski Center, near Ödemiş. The Spil Mountain between Manisa and İzmir is one of the most ideal places for extreme sports and trekking. There are as well many suitable areas for trekking in Kemalpaşa, Ödemiş and the Bozdağ highlands, the Kozak Plateau in Bergama and in the immediate vicinity of İzmir. 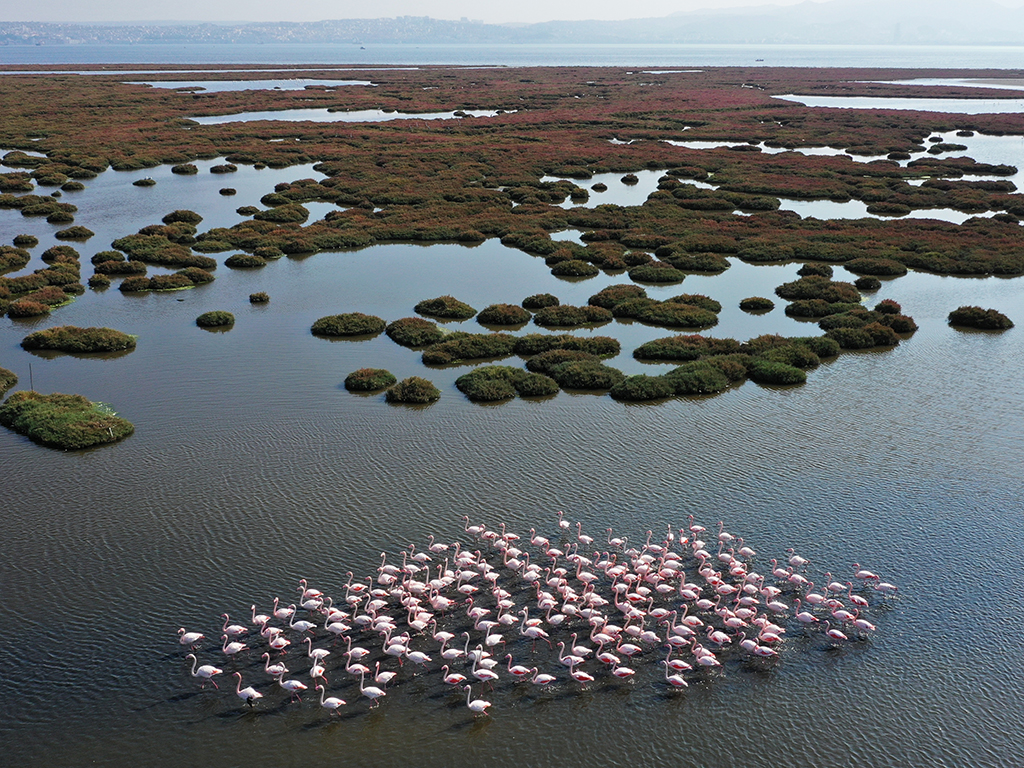 İzmir is the best proof that you can live in a modern city without leaving nature. A huge metropolis like İzmir contains the Gediz Delta, home to hundreds of species of birds and one of the largest coastal wetlands of Turkey. The Delta supplies approximately one third of Turkey’s salt production and meanwhile, it is also arable land for farmers and fishers of İzmir. In recent months, an official candidacy application has been filed by İzmir Metropolitan Municipality for the Gediz Delta to be included in UNESCO World Natural Heritage List. 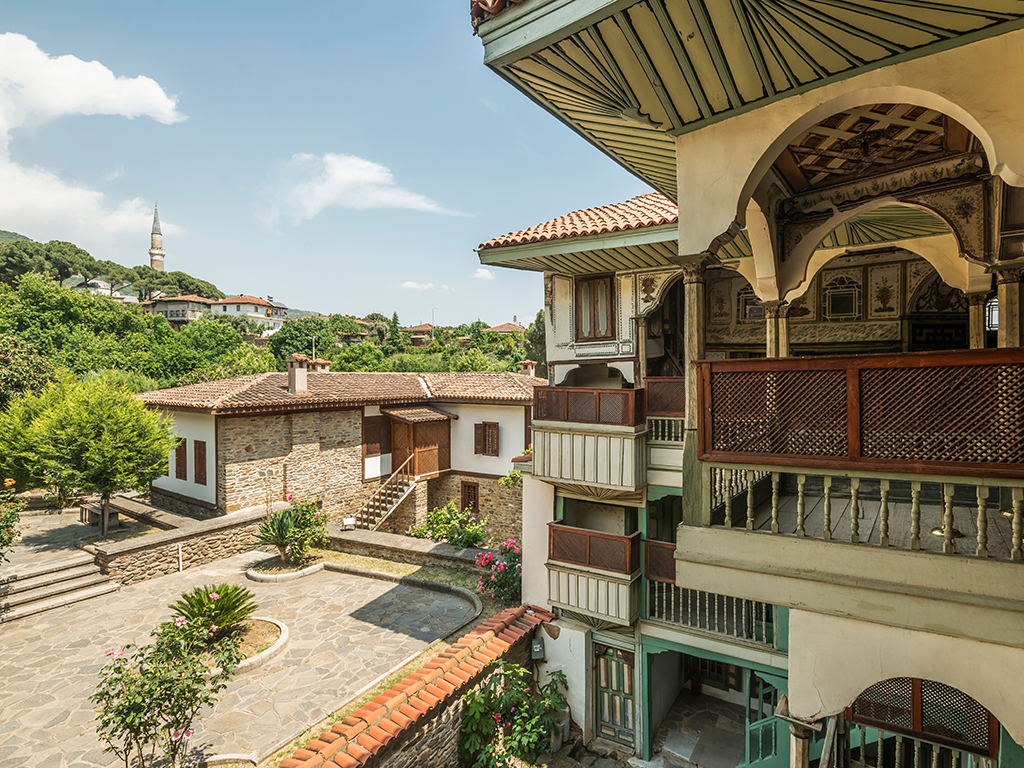 Birgi, in the proximity of Ödemiş, is located in a lush valley that also preserves its traditional architectural features with its high stone houses and wooden windows. There are tombs, as well as mosques and baths, and historical mansions, everything ranging from remote past to present in Birgi, with its history dating back 5,000 years. 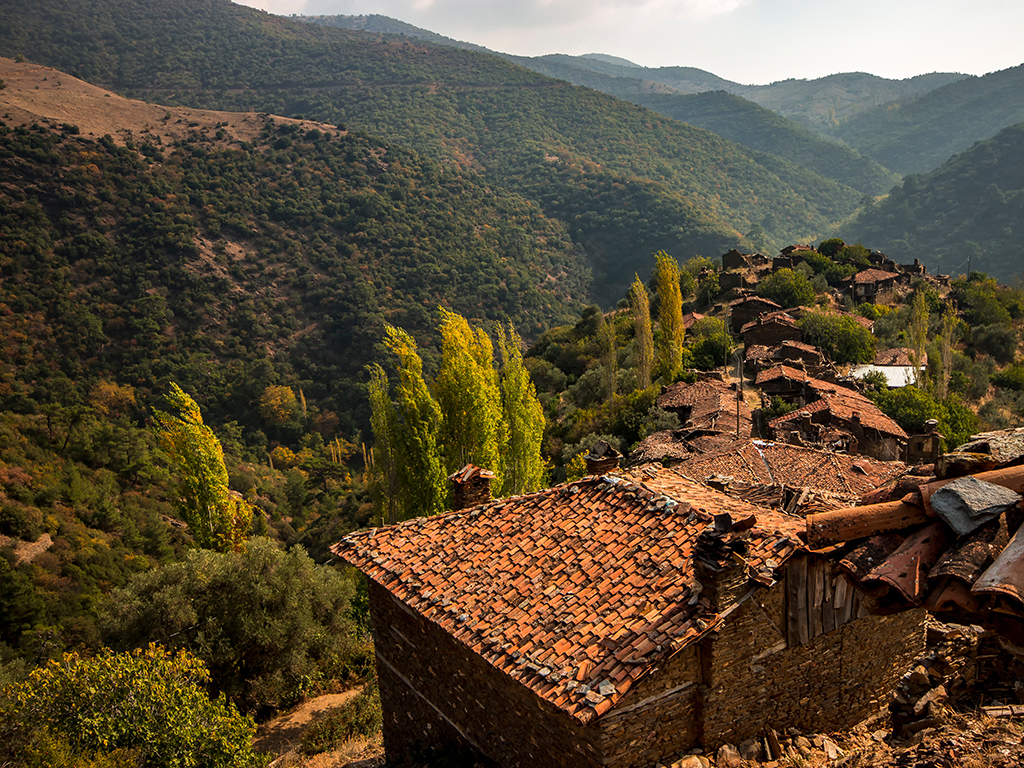 Ödemiş is located in southeast of İzmir, and Lübbey Village is 20 kilometers away from downtown Ödemiş. The history of Lübbey village in Ödemiş, İzmir goes back to ancient times. Zeibeks had military barracks in Lübbey in the Ottoman period. Rapid out-migration started in the 1980s. Some of the villagers in Lübbey moved to Çamyayla, another village 10 kilometers away, for fertile agricultural lands, while others migrated to metropolitan areas. 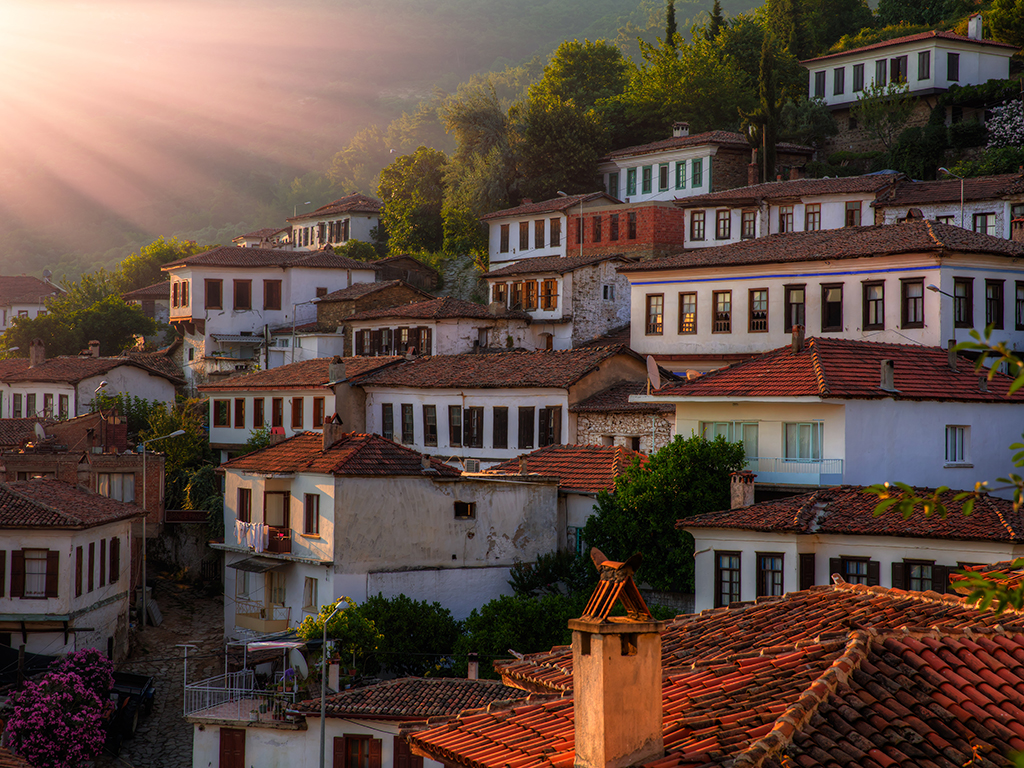 Şirince Village, located approximately 10 kilometers from the center of Selçuk, is an old Greek-Turkish village town founded in the 9th century. Şirince is an important attraction today with its cobblestone streets with centuries-old houses, vineyards, peach and olive trees among other natural beauties. 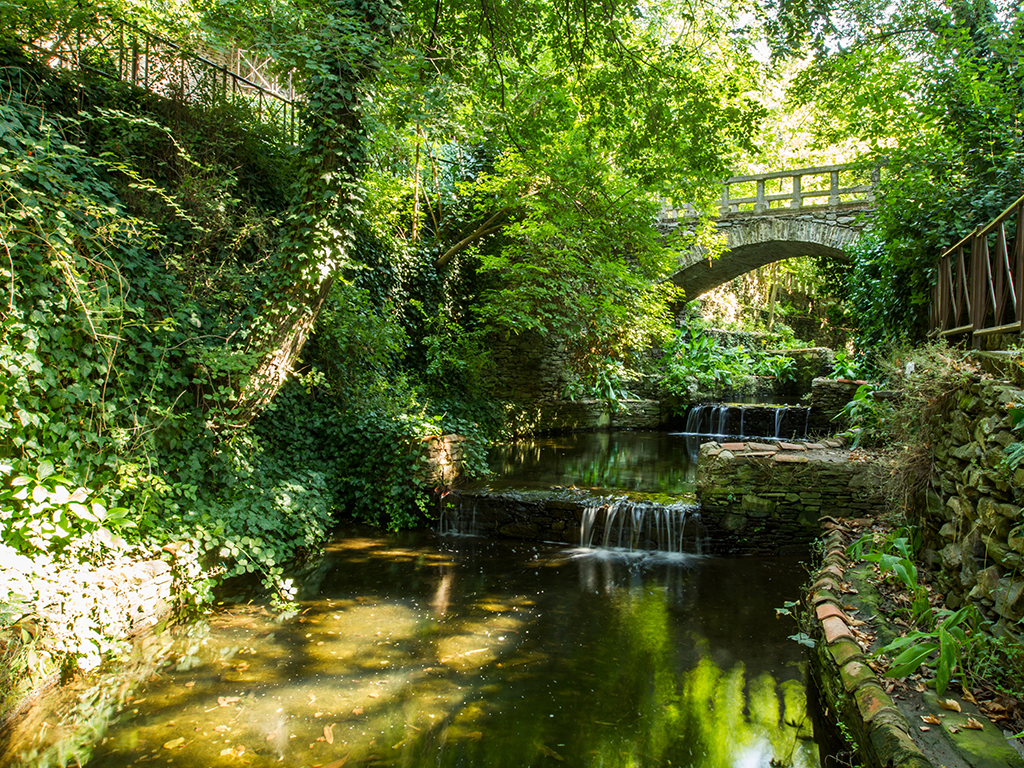 Tire is a district where history and nature go hand in hand with each other. Dating back three thousand years ago, Tire has a rich cultural heritage from the Hittites, Phrygians, Persians, Greeks, Romans, and Byzantines. The Tire plains, named Asia meadows, were even mentioned in Homer's Iliad. Tire was one of the Ottoman Empire’s most important centers. There are many examples of historical architecture in Tire worthwhile seeing, such as mosques, inns, bathhouses, fountains, social complexes, libraries, and prayer rooms. 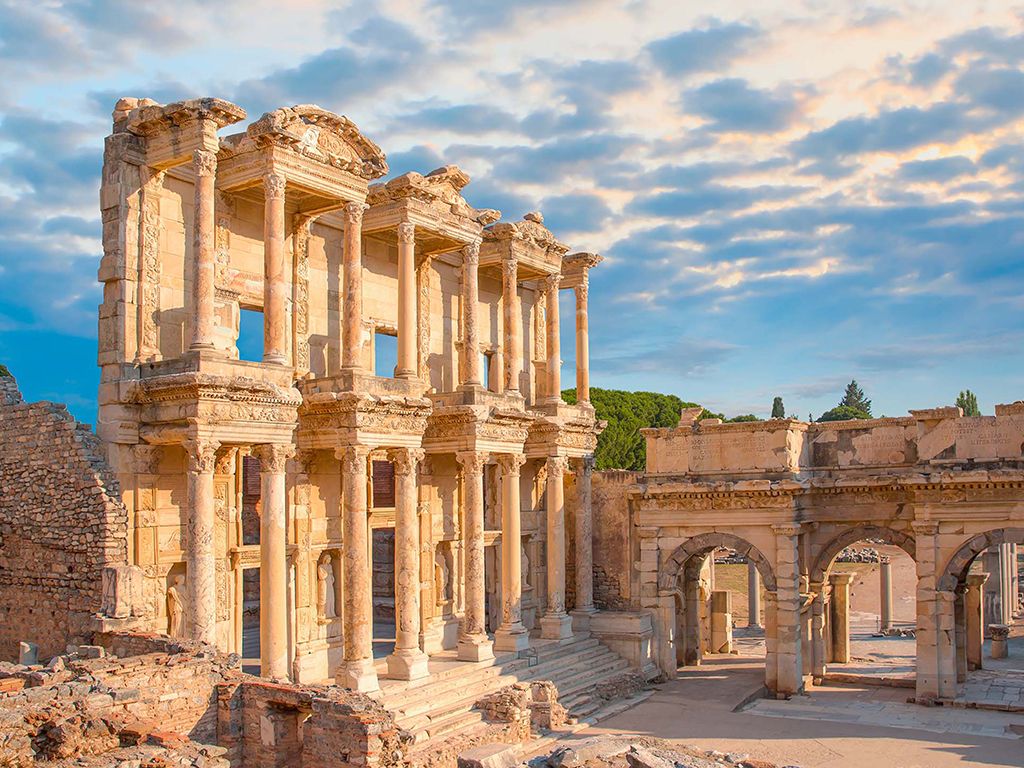 The Ancient City of Ephesus

One of the treasures on UNESCO World Heritage List, the Ancient City of Ephesus is an extraordinary historical treasure. The Great Theater in the city was the largest outdoor theater in the ancient world. One of the 7 wonders of the ancient world, the Temple Artemis is also among the must-see structures as well as The Library of Celcus, another architectural gem. 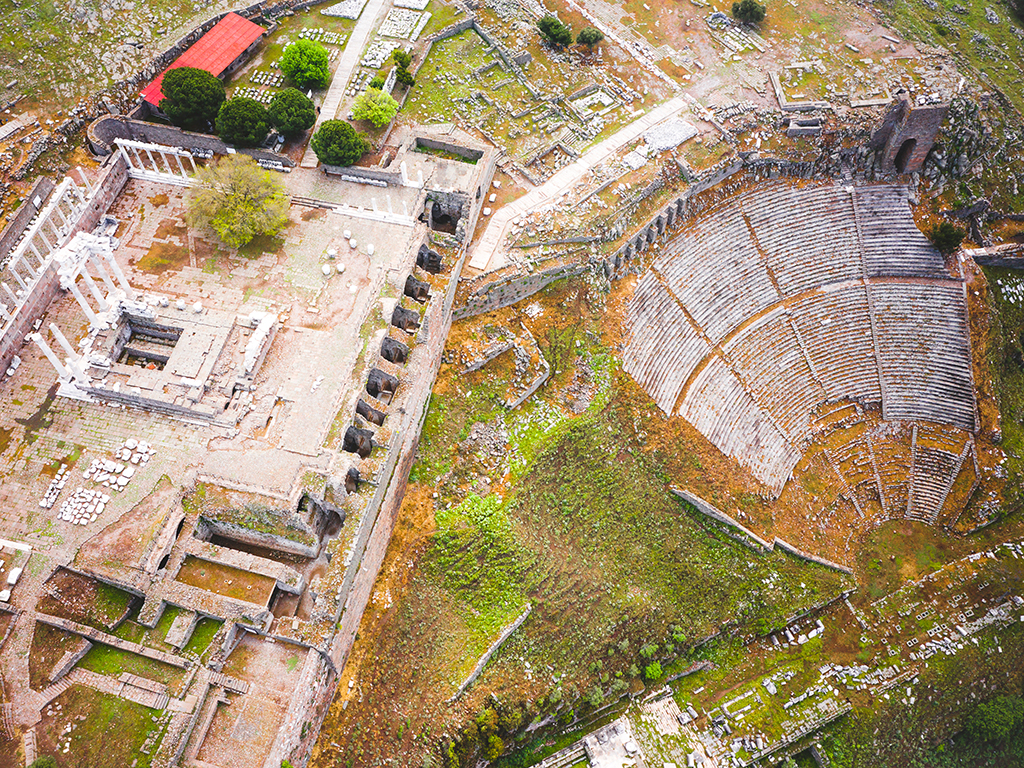 Dating back to the third century BCE, Pergamon is another asset in İzmir on UNESCO World Heritage List. The Acropolis of Pergamon was a major learning center in the ancient world and the administrative center of the Pergamon Kingdom. The Acropolis was also home to the steepest ancient theater and the second largest library in the ancient world as well as the first psychiatry hospital. 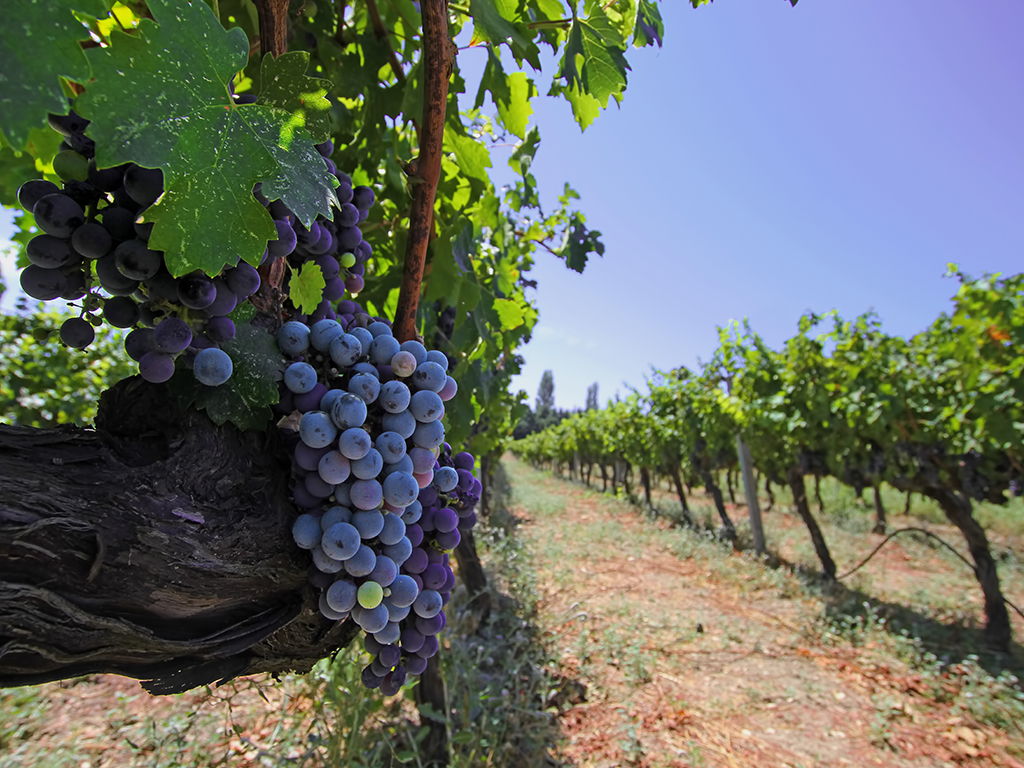 Urla is one of the most beautiful holiday resorts of the Aegean Region. George Seferis, Necati Cumalı and Tanju Okan all lived here. The longest coastline of İzmir is in Urla, with a beautiful view on the small Urla Bay and the 12 Islands across. 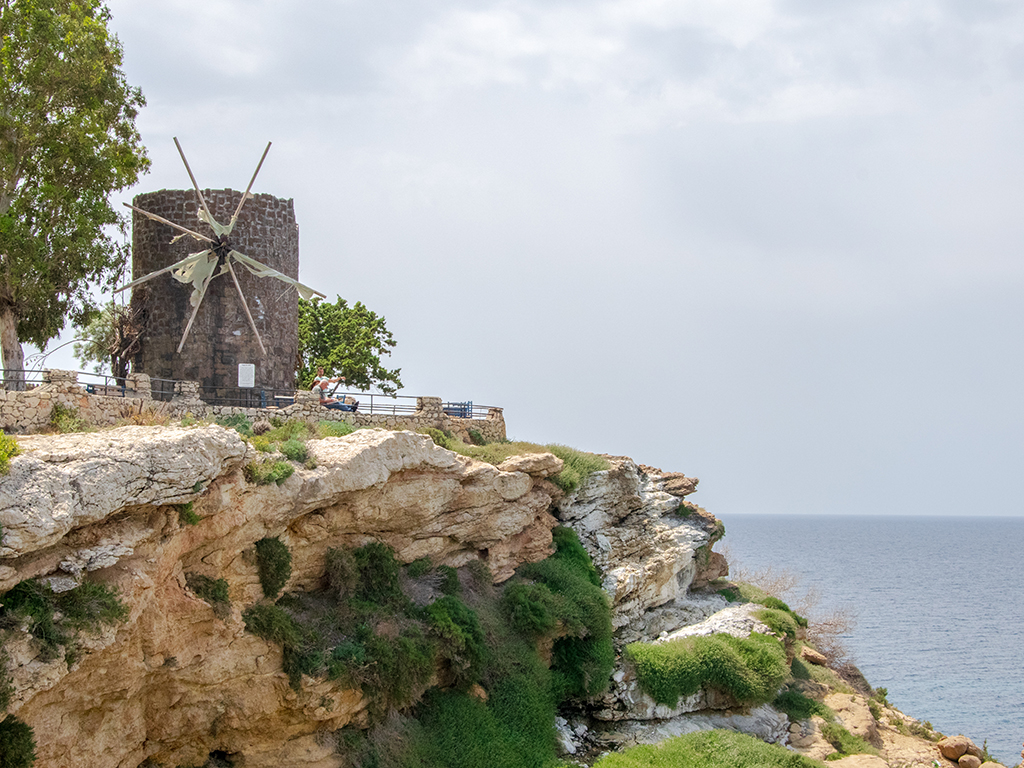 Seferihisar Turkey’s first Cittaslow city, Seferihsiar is located 45 kilometers away from İzmir. The history of Seferihisar goes back three thousand years with the ancient city of Teos. Seferihisar promises peacefulness with its calm streets, friendly people, an ancient town and a crystal clean sea.

Located 79 kilometers north of İzmir city, Foça takes its name from Phocaea, an old Ionian city. The district is divided into two quarters as Old and New Foça, and has a small port. With its proximity to the center and its clean bays, it welcomes many tourists during the summer season. Making its name renown for the legendary Siren Rocks in Homer's Odyssey, Foça is the shelter area of ​​the Mediterranean monk seals, on the verge of extinction. 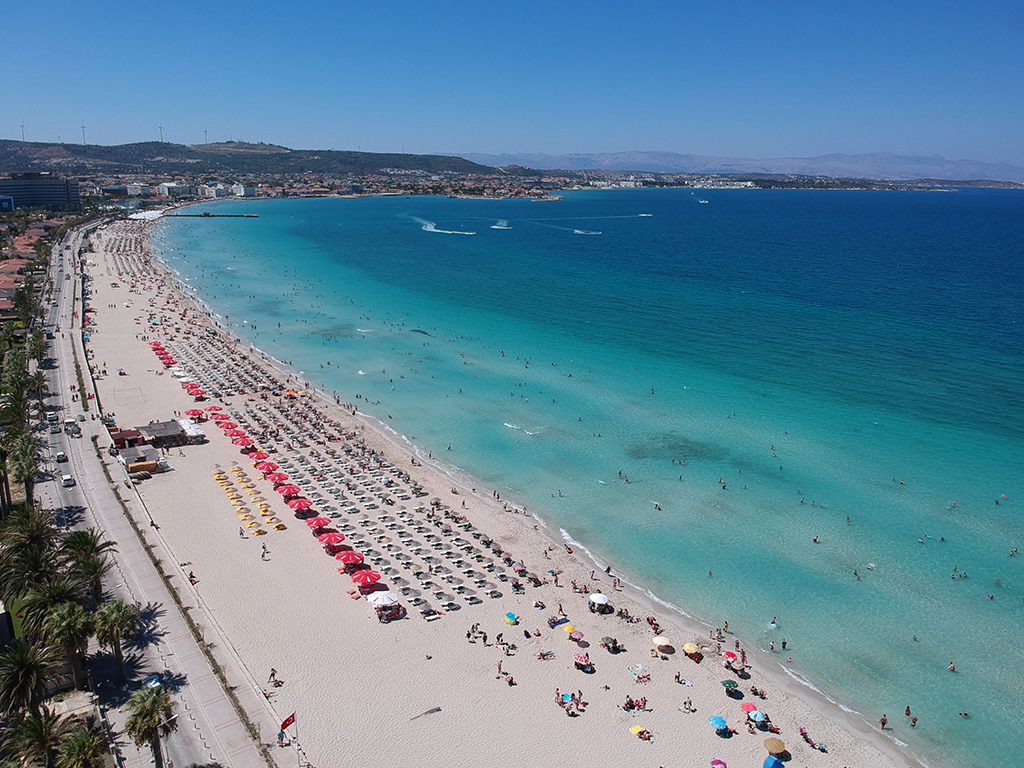 Located west of İzmir, Çeşme is a world-famous holiday destination with its deep blue waters, white beaches and nightlife. The Çeşme Marina is one of the most modern and new facilities in the region; it is considered a paradise for yachting, awash with beautiful bays. Çeşme is also one of the first addresses that comes to mind for windsurfing in our country. With its convenient infrastructure for surfers of all levels, Alaçatı is also host to international surf races.