Kemeraltı is one of the world's largest historical open-air bazaars and has been İzmir's commercial center since the 17th century. The current Kemeraltı Bazaar, which was formed by the filling of the sea, was used as a harbor in the past. You can find everything you are looking for in Kemeraltı. This magnificent bazaar hosts an important cultural heritage waiting for you to discover, as well as colorful and different shops.

İzmir has hosted various communities and cultures throughout history, and this diversity is reflected in every aspect of İzmir, from religious culture to gastronomy. Kemeraltı is the place where you can feel this diversity the most in İzmir. While walking through the colorful shops among the landmarks, you will be able to taste local delicacies, see the common life of different beliefs, meet authentic handicraftsmen and feel the joy of living in the moment in the labyrinth-like streets.

A Small Note: Please do not forget to raise your head while walking… Birdhouses, admirable architectural details, we are sure that will leave a smile on your face. 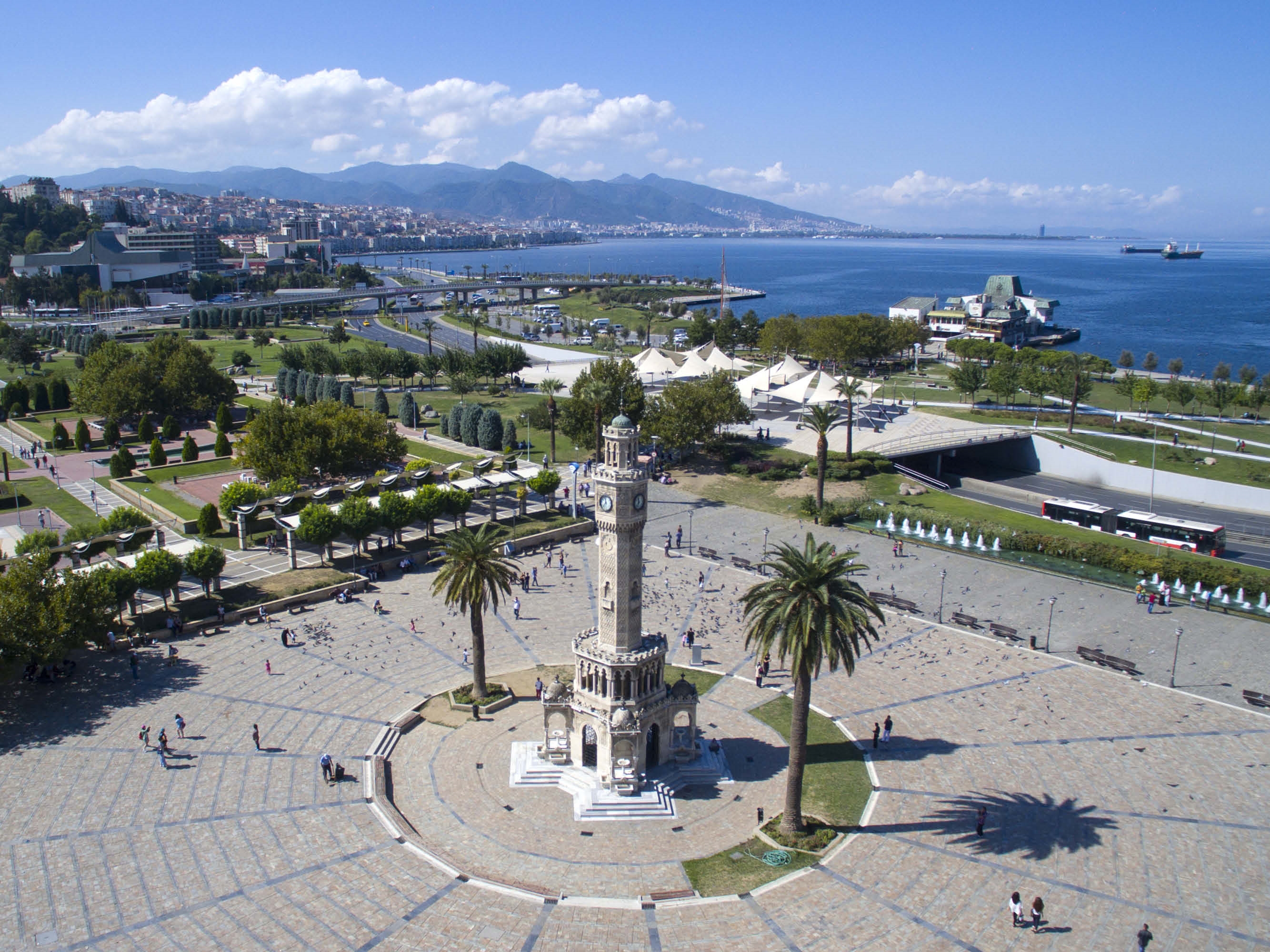 When asked where is the center of İzmir, no doubt all İzmir residents will say Clock Tower. The Clock Tower was built in 1901 to commemorate the twenty-fifth anniversary of the Ottoman Sultan Abdülhamit II's accession to the throne. The cherry and green colour marbles of the Clock Tower, one of the most important examples of the orientalist style in Turkey, were brought from Marseille by the French architect Raymond Charles Pere. At the same time, The Clock Tower with its fountains on all four sides functions as an important meeting point.

In the upper part of the Clock Tower, there is a clock that is said to have been a gift from the German Emperor Wilhelm II.

The clock of the tower is set every six days by a family that has undertaken this task for three generations. The Yalı Mosque, located just across from the clock tower, was located by the sea in the 18th century when it was built. The building, located behind the mosque and used as the İzmir Government House today, was built as the Katipzade Mansion in the 19th century and has become one of the important symbols of İzmir's liberation struggle. 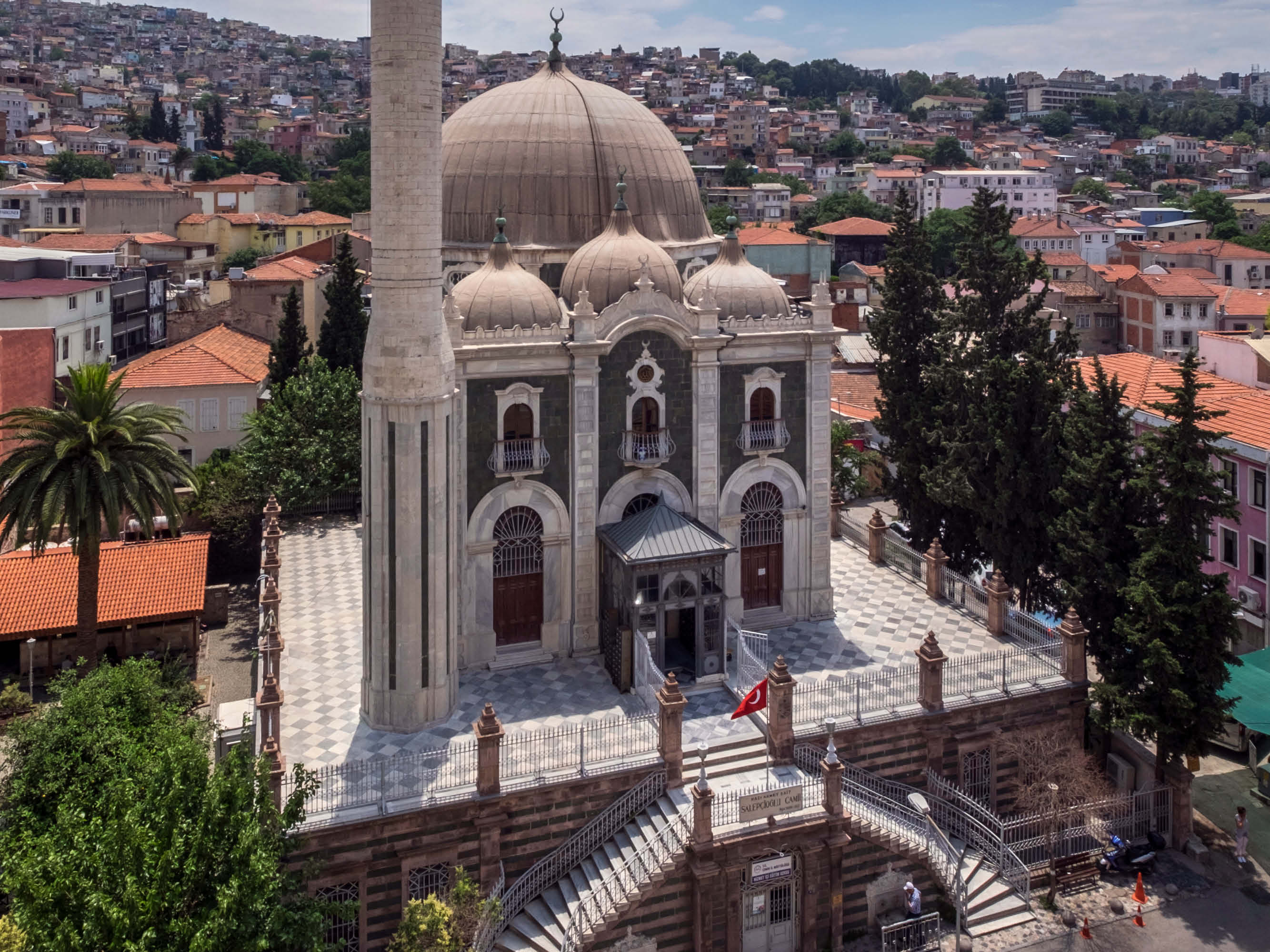 The Salepçioğlu Mosque is one of the structures that will impress you the most with its architecture in İzmir. This mosque, which excites its visitors, has a rare baroque style in Turkey. The mosque was opened for worship in 1906, and the green-colored smooth-cut stone and white marble decorations used in its construction highlight the orientalist atmosphere of the mosque. The lower floor of the Salepçioğlu Mosque was designed as a madrasa and a school, and the upper floor as a mosque. 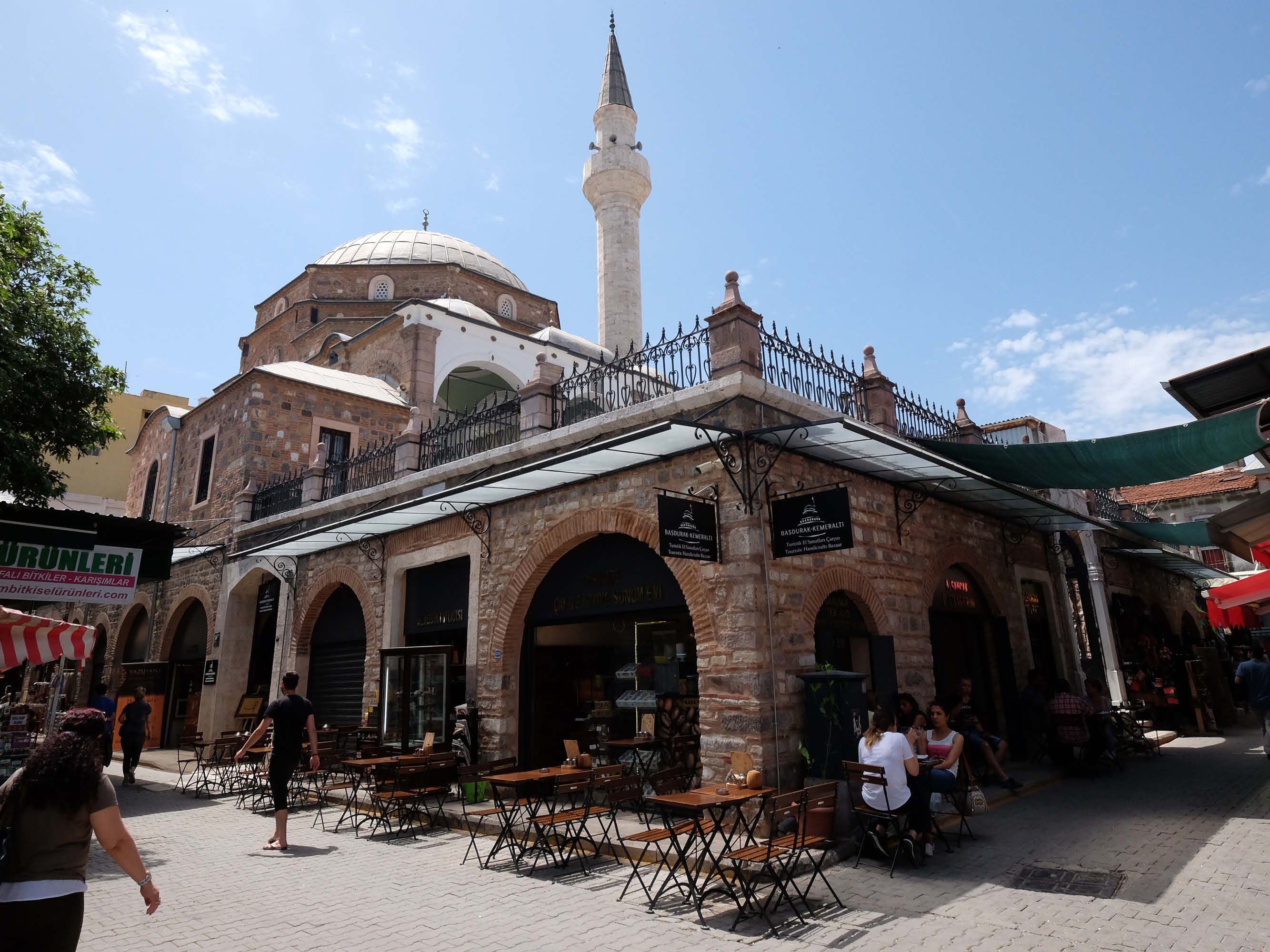 While walking along the old harbor in Kemeraltı, Başdurak Mosque is one of the important works built in the 17th century. The mosque's single lead-covered dome and minaret made of ornately carved stones are worth seeing. The embellishment and hand-drawn ornaments on the interior and exterior of the building show the aesthetic perception of the period.  It is possible to buy souvenirs, jewellery, accessories and the rarest products of handicrafts special to İzmir from the shops on the lower floor of the mosque. 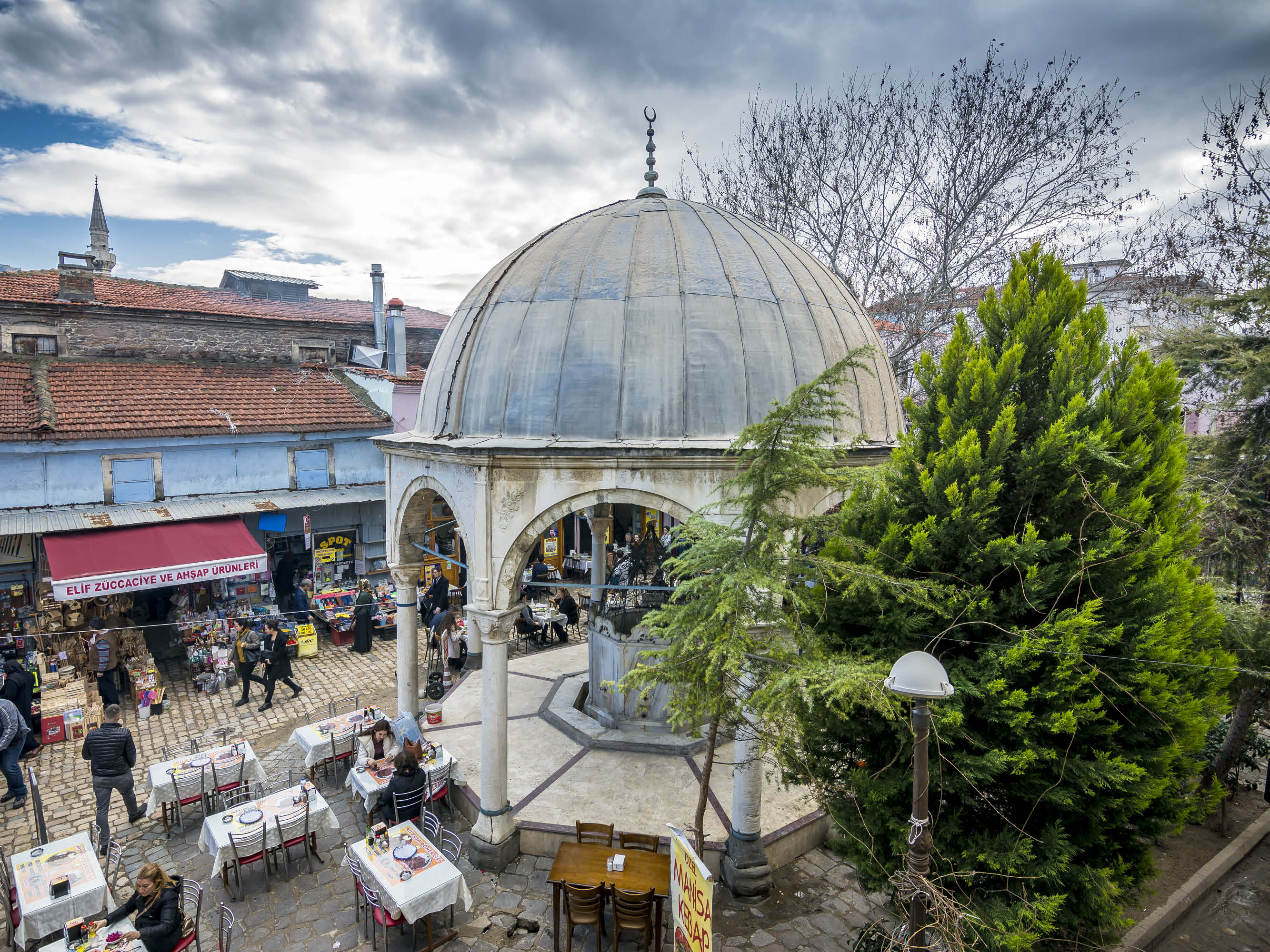 While exploring Kemeraltı, remember that you are wandering around a place that was once a harbor! Ali Paşa Square is one of the important places that will make you feel that the area is an old inner harbor. Since this square was an area where ships docked in the past, it was called Gemiler Pier in the 19th century and became the center of Kemeraltı Bazaar. The buildings you see around the square served as a kind of exchange until the İzmir Commodity Exchange was established in 1891.

Hacı Salih Pasha Fountain, which has become the symbol of the square and is located in the center of Ali Pasha Square, was built in 1828 by the Grand Vizier Salih Pasha. The fountain which was once the focal point of trade where caravans stopped, located in this square, still continues to cool the visitors today. Nowadays, the inns around the square host delicious local restaurants. 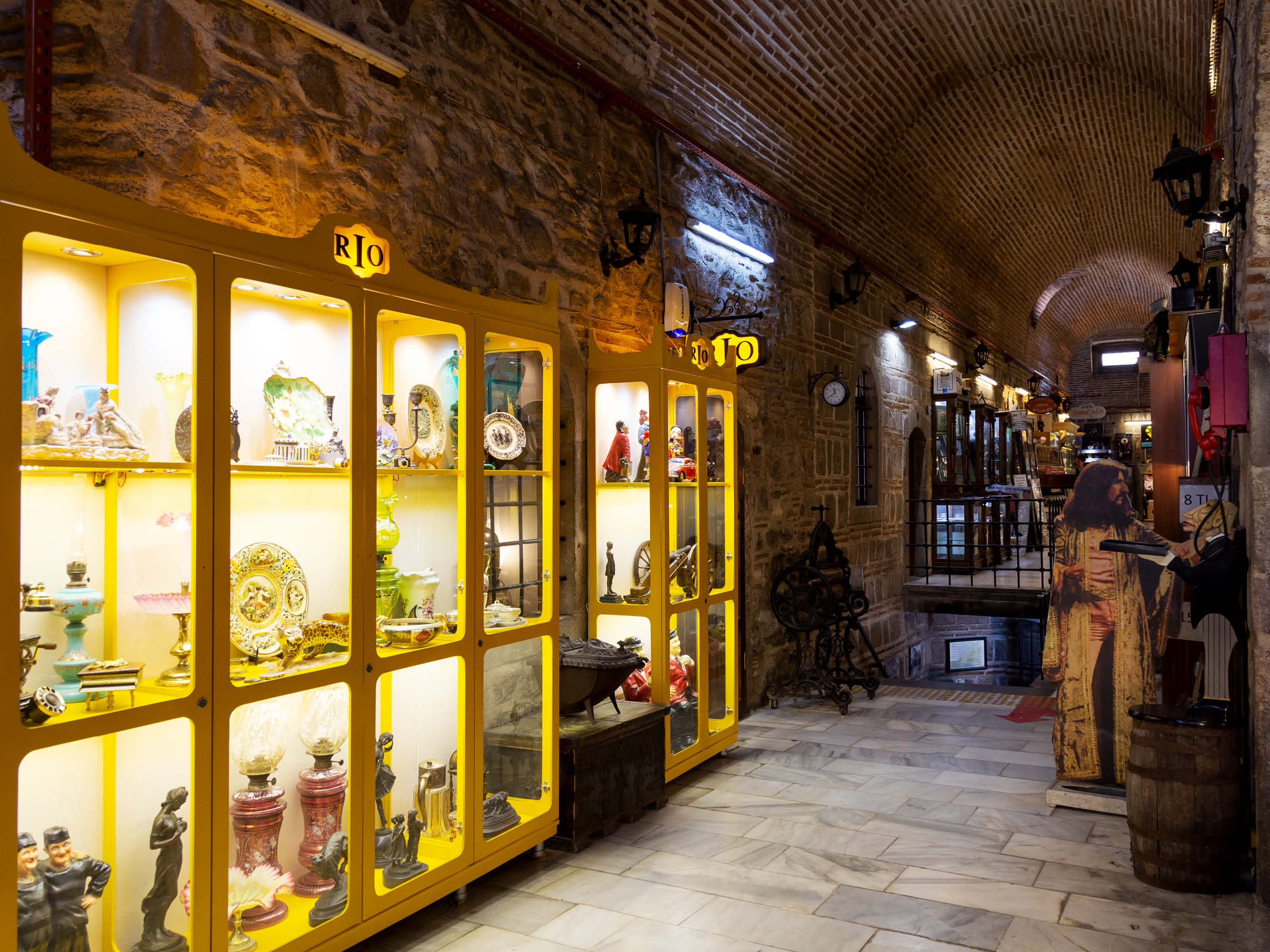 The Antique Dealers Bazaar, since its opening in 2019, brings together collectors and antique dealers in Kemeraltı.  The Antique Dealers' Bazaar is the only place where antique dealers meet in the same place and deals with things that have memories, not things that are old. While visiting the bazaar, you learn that every item you touch has a unique story. There are about forty shops in the bazaar. While visiting the bazaar accompanied by the songs played by the gramophones, the books and countless old items that carry the smell of the period will take you on a journey into the past. It is also possible to see the world's first disabled car here. 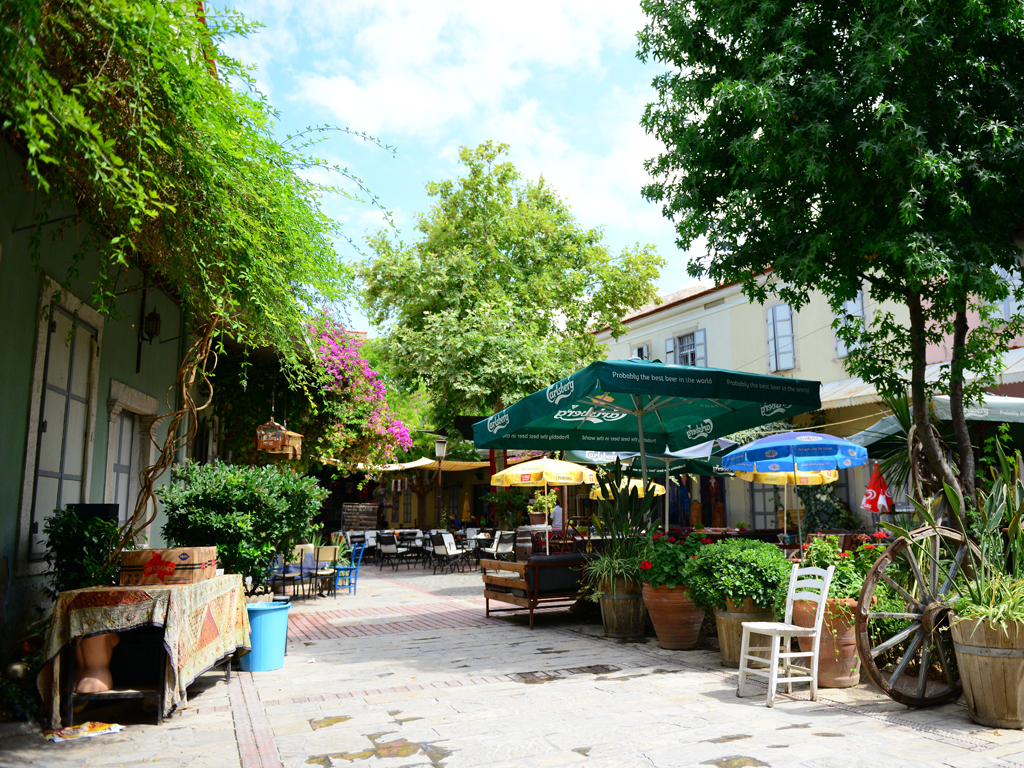 Abacıoğlu Inn is one of the inns that were built one after another in Kemeraltı, which was the most important harbour of a period, with the effect of increasing trade in the 18th century, which has survived to the present day. The inn, which was used for accommodation, trade and storage, took its present form after the restoration completed in 2007. Abacıoğlu Han was in the Jewish district for a while and was a neighbor to the Greek church courtyard.When you enter this inn, a large courtyard surrounded by trees welcomes you. You can see two-floor colorful spaces around this courtyard. Abacıoğlu Han is a pleasant stop where you can take a short break during your Kemeraltı trip with its well-established tradesmen and delicious eating and drinking places.

Bel Hittel Synagogue was established in the 19th century as a religious academy in the house of the Palachi family. When it was completely burned as a result of the fire in 2006, it was restored and opened as the Rav Hayim Palaçi Memory House. Rabbi Hayim Palaçi was awarded by the Ottoman Sultan Abdülmecit as the "religionist in charge of justice". The tomb of Hayim Palaçi, the founder of the synagogue in the Gürçeşme Cemetery, the purification pool (mikveh) next to the tomb, and the Bet Hillel Synagogue are called the Diamond Triangle. The Diamond Triangle is believed to be a must-visit holy place. 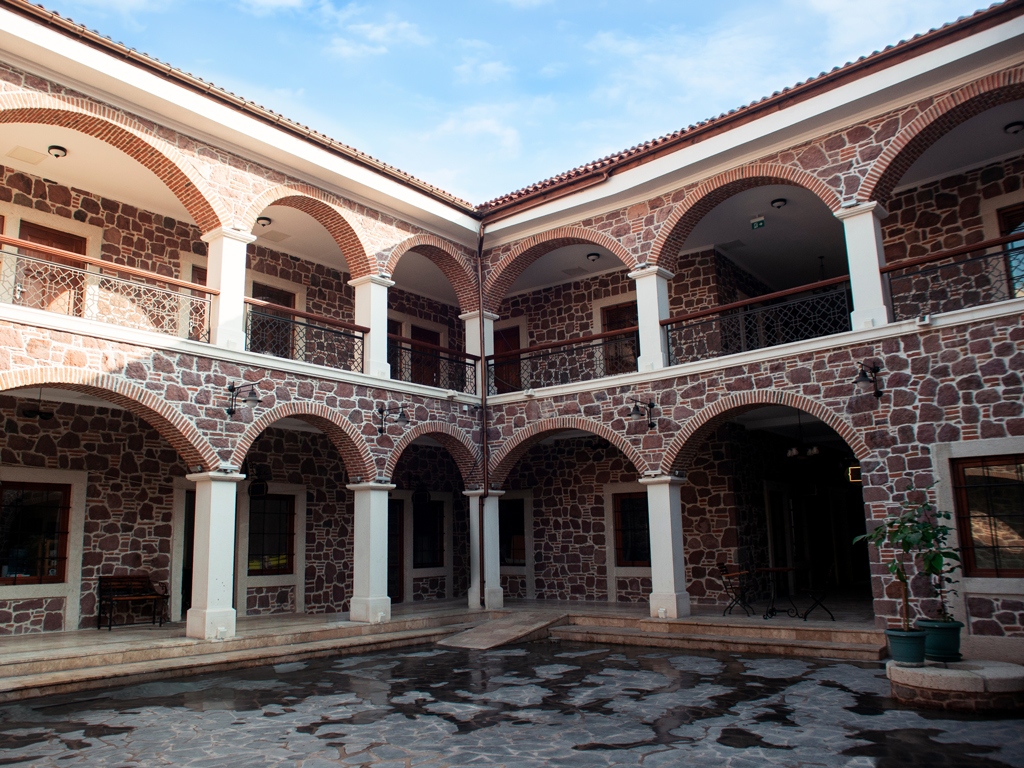 The inn was built from wood towards the end of the 18th century by the Karaosmanoğlu family, who exported cotton to Europe. In the past, this inn consisted of about twenty large and small shops and hosted many craftsmen such as tinsmiths and coppersmiths. The inn was restored in 1966-1968 and hosted forty-three shops, most of which were leather traders and shoemakers. In 2016, it was restored in accordance with its original form and took its present form. The inn, now known as L'agora, is one of the unique stops to relax and revisit the history with its boutique hotel, restaurants and shops. You can reach Havra Street by using one of the doors of the inn. 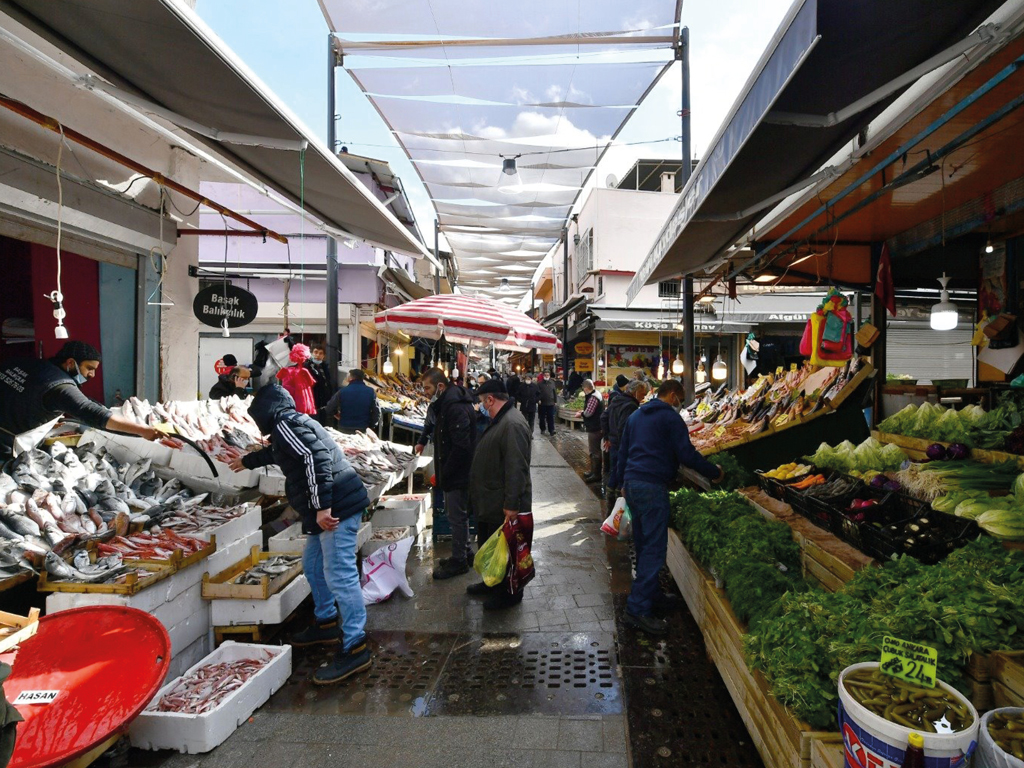 The Jewish community, which came to İzmir with immigration from various countries and cities, especially Portugal and Spain, settled in Havra Street, especially since the last quarter of the 16th century. The Jewish community established the Juderia (Jewish quarter) in this region and made it an important part of the city. There are nine synagogues and rabbinical buildings, four of which are adjacent to each other, of the nine synagogues around the street. Today, this structure constitutes an architectural complex that is unique in the world.

According to 19th-century sources, there are Greek and Jewish wineries, a Turkish bath and a Greek pharmacy on Havra Street. The grape and vine leaf motifs on the keystone at the arched entrance of the street are the traces of the historical winery. With the establishment of Israel, a large part of the Jews of İzmir left the city. Although the street has lost its original character, it maintains its commercial texture and liveliness. For some people in İzmir, it has become a tradition to buy fruits, vegetables, fish, cheese and pickles from Havra Street. You can find the most delicious options of classic Turkish desserts at Basmane Lokmacisi, located at the entrance of Havra Street. 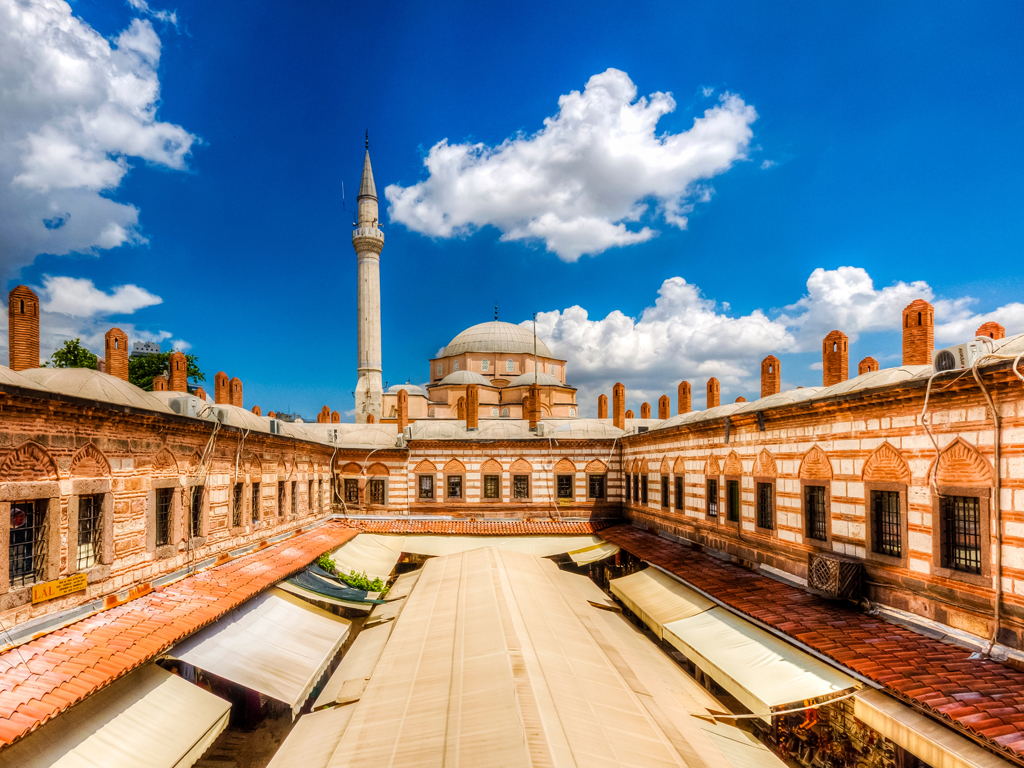 The Kızlarağası Inn was built in 1744, where every İzmirian visiting Kemeraltı would stop by and have a Turkish coffee. The inn was used as a pier at the mouth of the harbor when it was built. It is difficult to understand from its present location that it was used as a pier. The inn, where the caravans unloaded their cargo and the travellers stayed in the rooms on the upper floor, maintained its commercial importance until the last quarter of the 19th century. Restored between 1988-1992, it now hosts 200 small shops selling mainly antiques, leather, jewelry and souvenirs. It is one of the stops where you can spend time with pleasure for shopping. 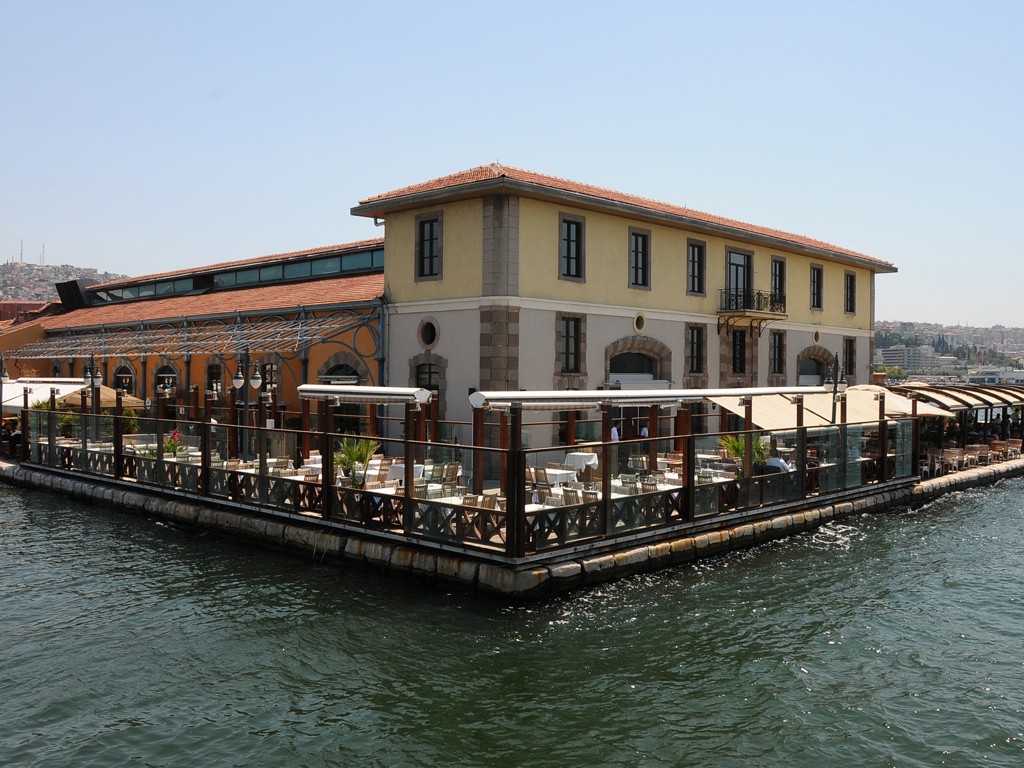 Ratings Your likes important for us.