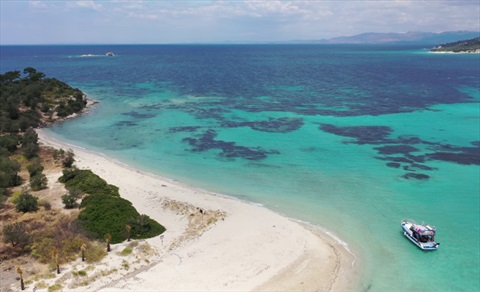 The Most Beautiful Bays of Dikili

Dikili is one of the places where you can experience green nature to the fullest while enjoying the deep blue sea. You can swim in almost every corner of Dikili. You can wander around the unique bays by boats departing from Bademli Harbor. We have listed the beautiful beaches of Dikili, which you can enter for free.

You can arrive on a boat from Dikili Bademli Port to Garip Island, which is approximately 400 meters from the mainland. When you reach the island by boat, you can sunbathe and swim as much as you want and enjoy the island. There are no facilities on the island, so you may need to go equipped. In addition, it would be good to bring a parasol with you, as there are not many trees on the island that can benefit from their shade. Or if you charter a tour boat, you can swim to the island and immerse yourself in the white sands until the boat leaves. Even if it is short, you can taste the atmosphere of the island.

Garip Island, which carries traces of ancient times, is one of the three islands in the "Lighting Islands" (ancient name: Arginnsai) mentioned by the famous historian Strabo. The second island is Kalem Island, which is right across from Garip Island. Since this place belongs to a private business, only those staying at the hotel can use the beach. It is thought that the third island merged with the land after various natural events and took the form of a peninsula. This archipelago region is famous for the great sea warfares between Athens and Sparta in 400 BC. 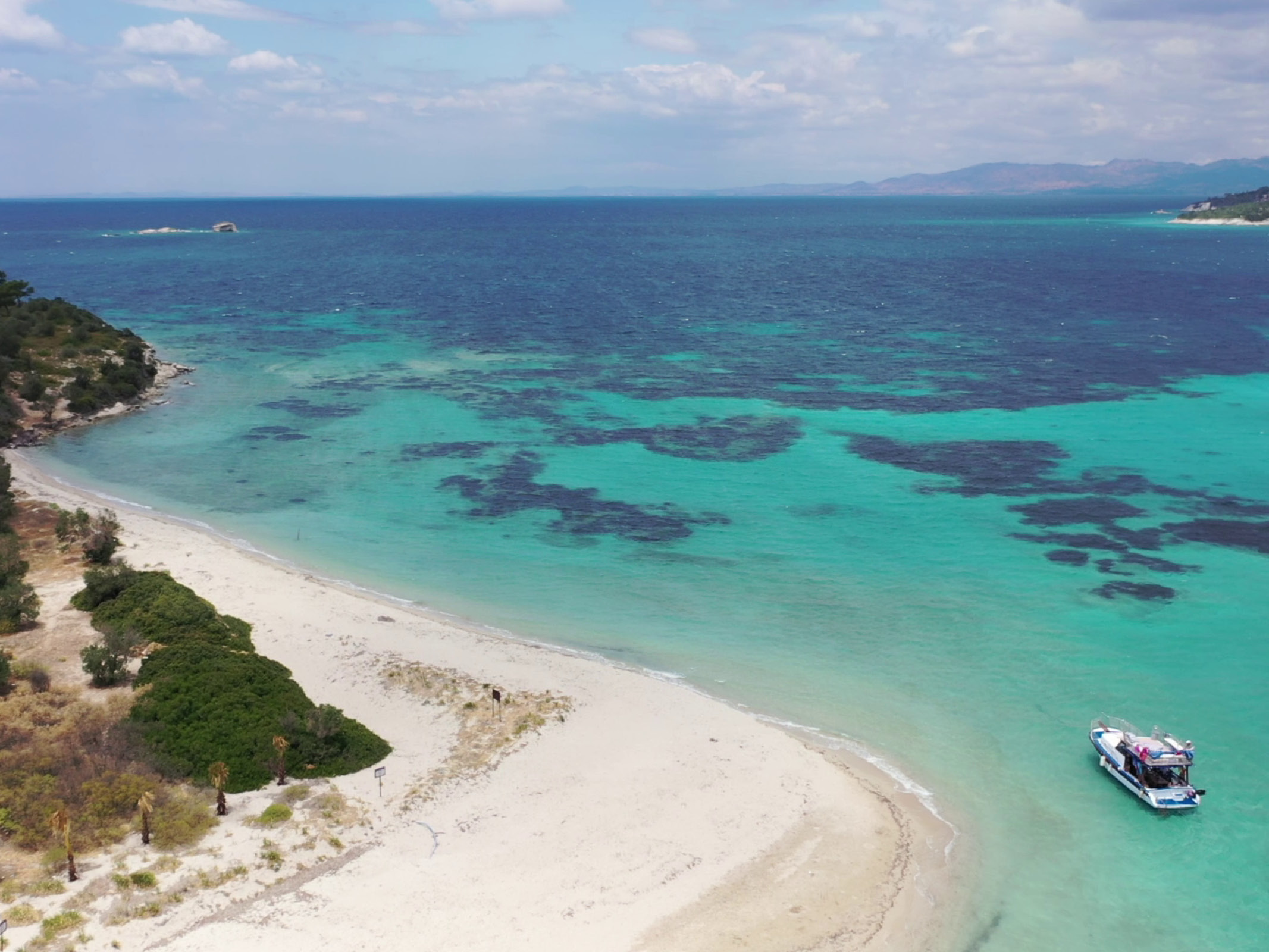 This bay, which takes its name from the fragrant herbs in the region and is also known as Kokarot Bay, is one of the most untouched bays due to the lack of transportation by land. It is one of the must-see places with its calm sea and soft white sands. You can reach this bay by boats departing from Bademli Harbor. 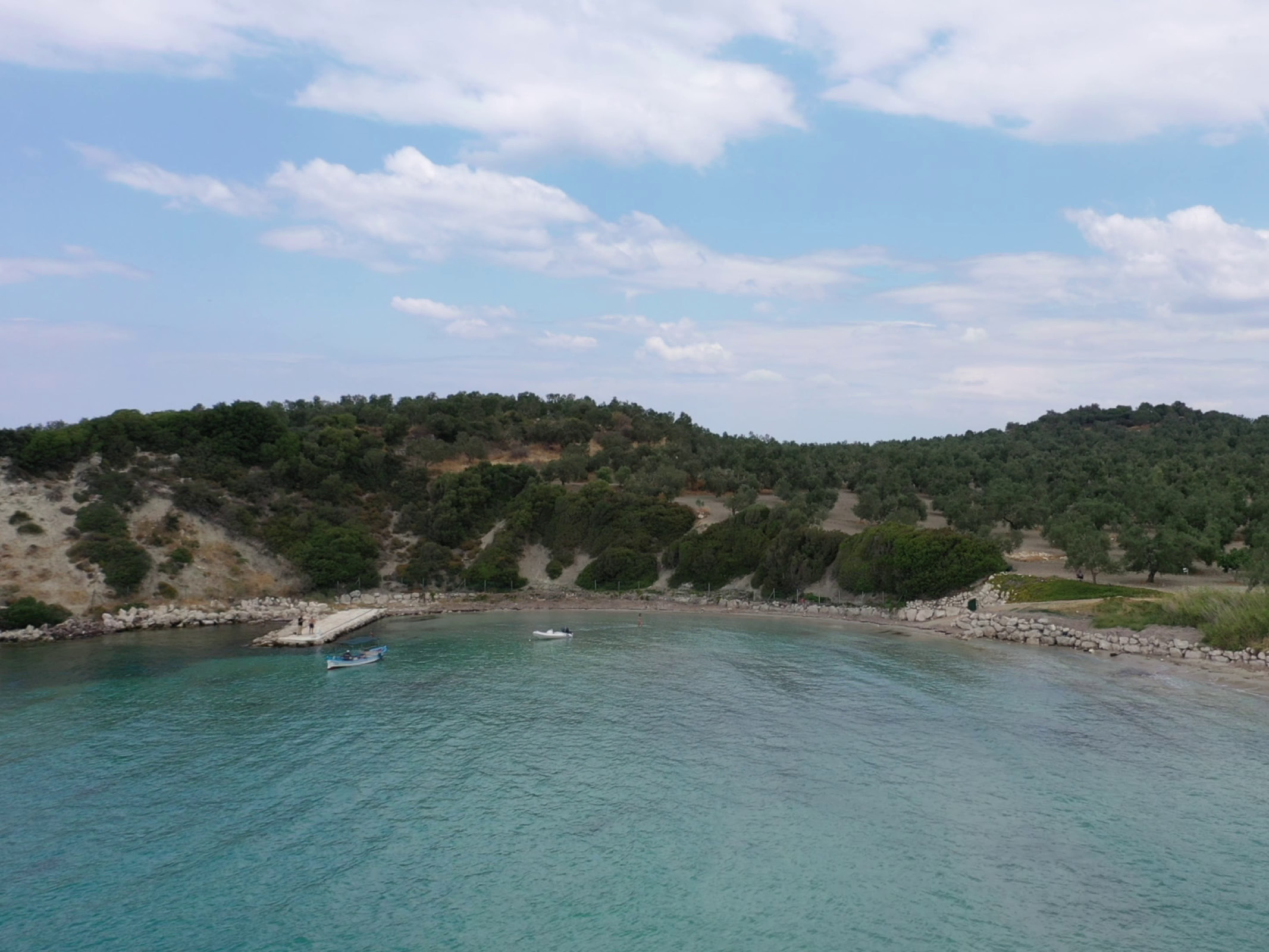 Pissa Beach is 12 kilometers from the center of Dikili. It is one of the bays that you can easily arrive after Bademli, located in the southwest of Dikili. There are no shops in or around the bay area. With its white sand and clear sea, Pissa Beach is also a good option to watch the sunset from the sea. 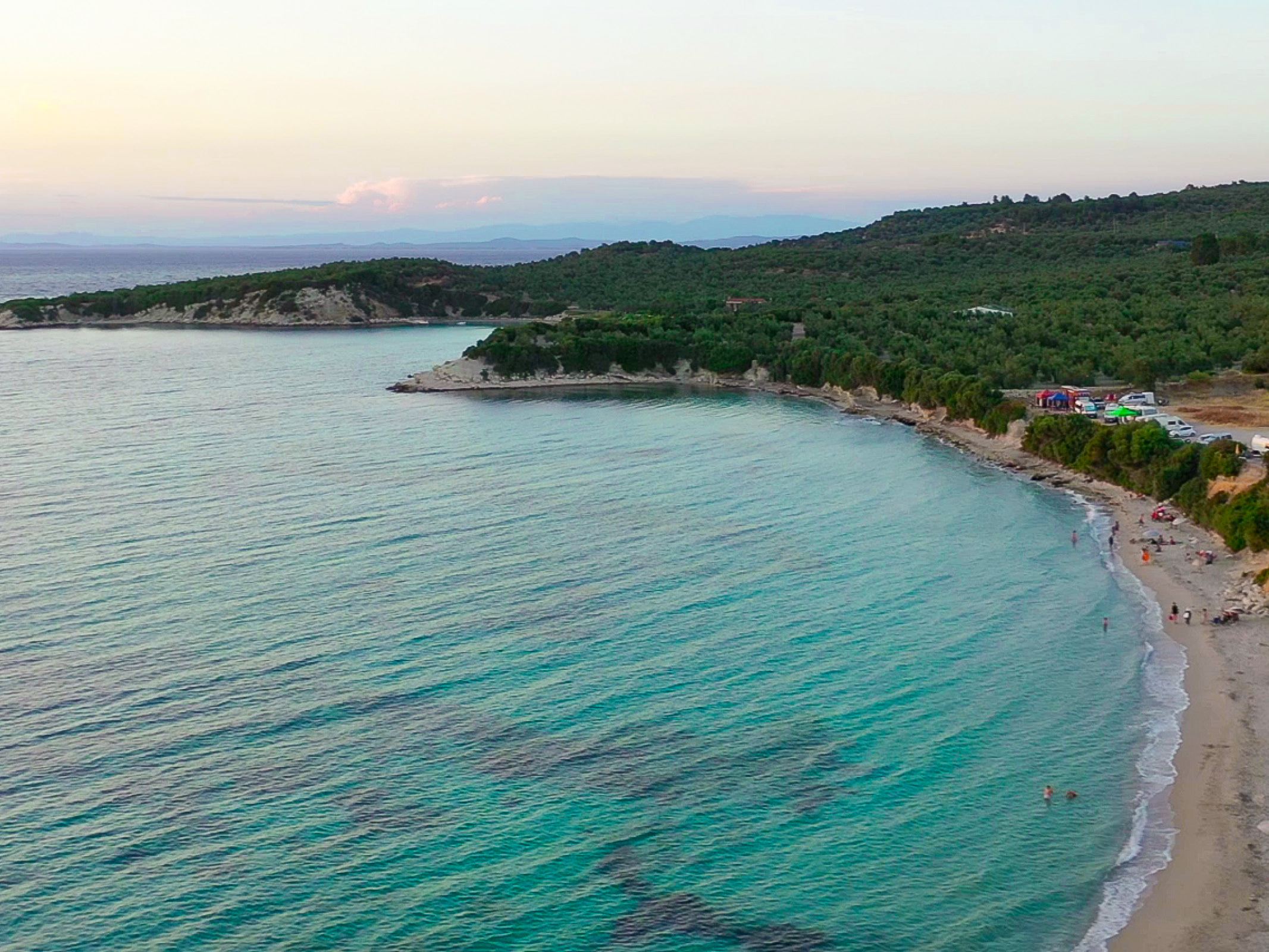 Denizköy is a holiday destination located between Bademli and Çandarlı. In addition to the small shops on the beach, there is also a large area open to the public and free of charge. Located in one of the beautiful bays of İzmir, Denizköy is among the places preferred by the camper. 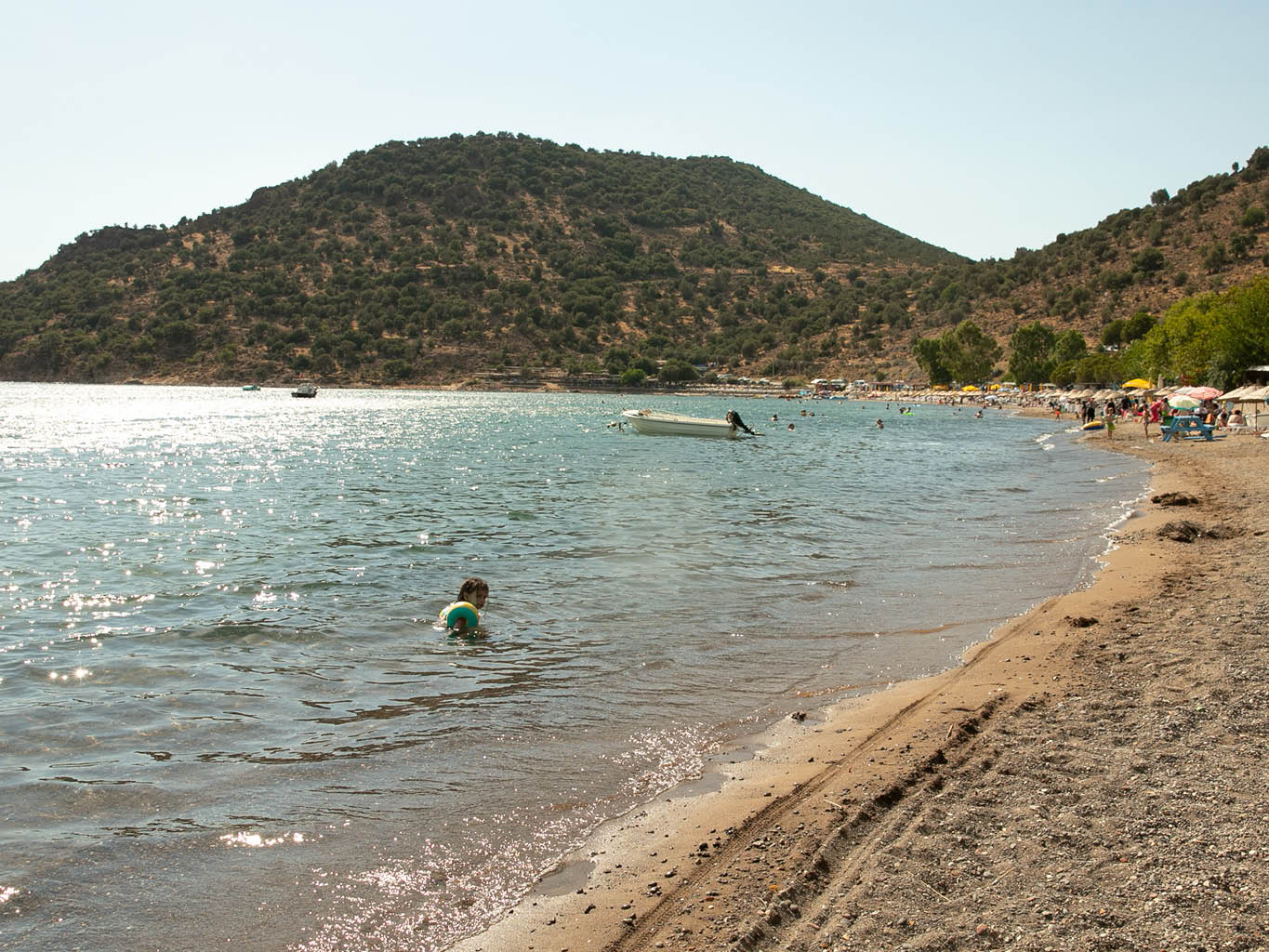 It is located southwest of Dikili, 15 kilometers from the center. On the way from Bademli Village to Denizköy, 5 minutes after turning on the dirt road, you arrive at the beach. It is a quiet and desolate beach that is easy to access. Hayıtlı Bay, which does not have shops, has a clean sea like many other bays in the region. 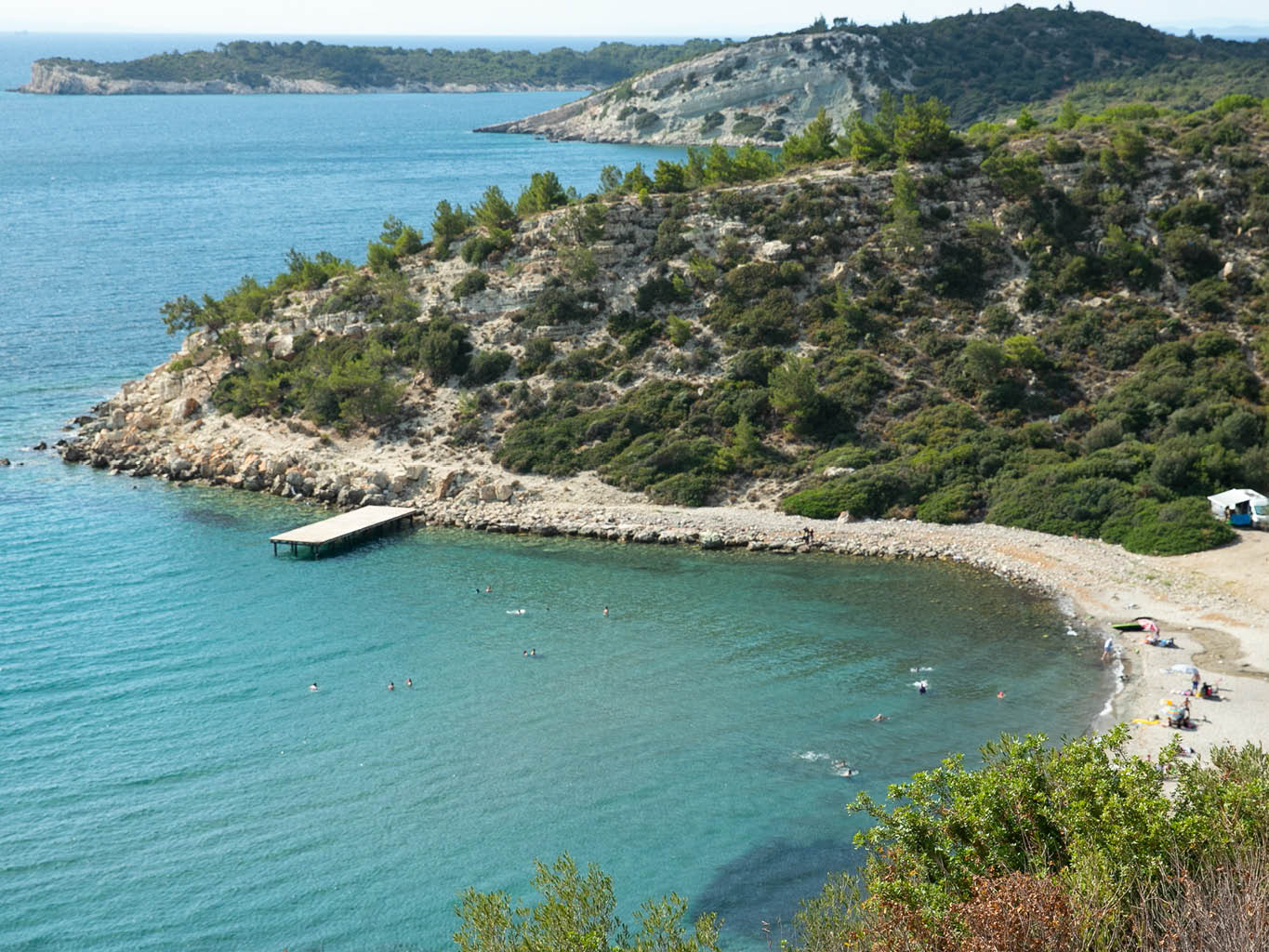 It is located about 10 kilometers from Dikili center. This bay is located next to Bademli Bay and is smaller. The bay has white sands and a turquoise sea. Don't be surprised if you see green-gray people walking on the beach because there is natural clay in this bay. Realizing this, many visitors care for their skin by covering their faces and bodies with clay. That's why the name of the bay is Killik (meaning clayey in Turkish). While there are small shops in Killik Bay, the narrow coastline right in front of the businesses is open to the public and free of charge. 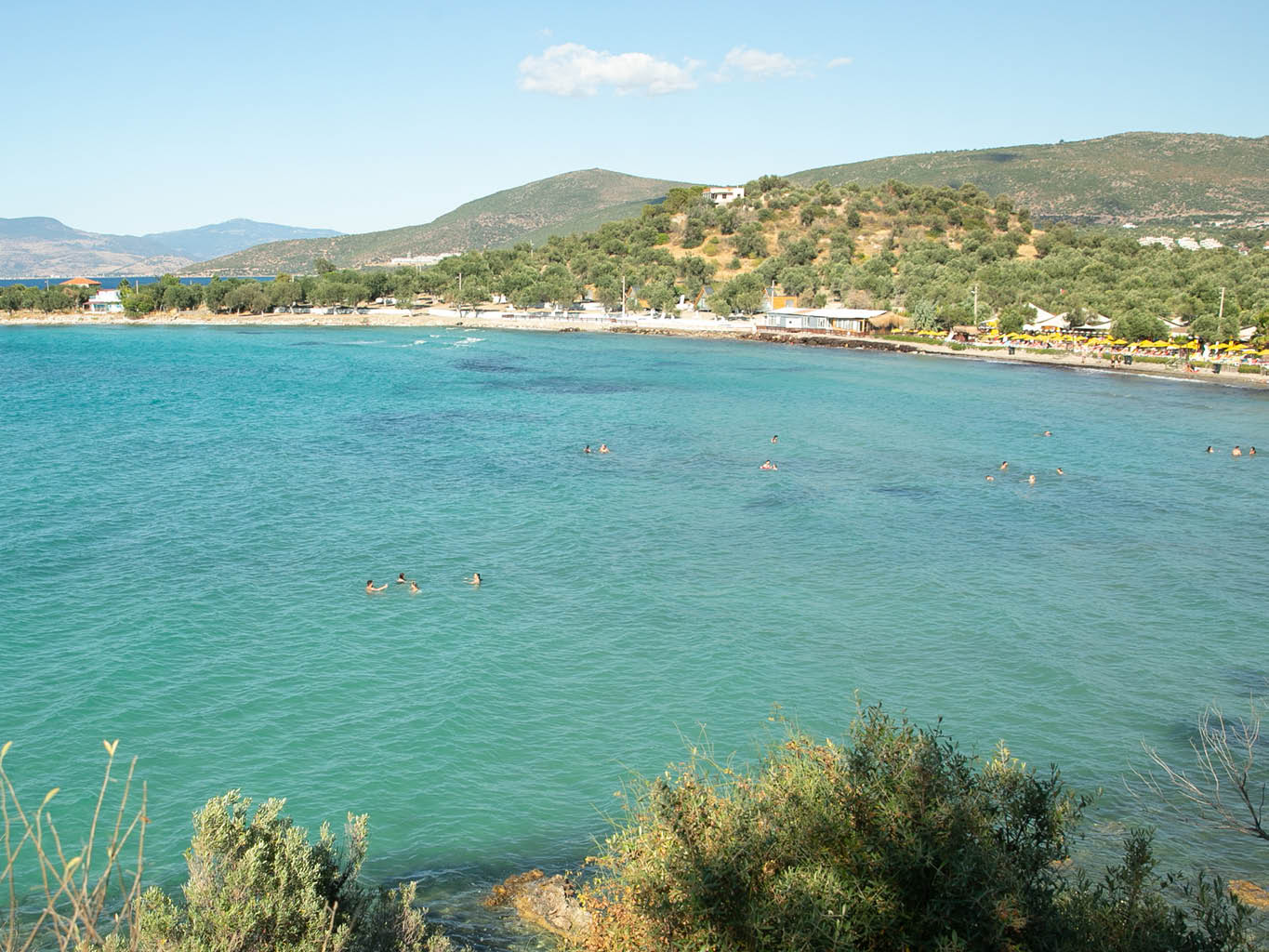 The bay in Dikili stays dark at night because it does not see the moonlight, hence the name of the bay is Küçük Zindancık (small dungeon). Küçük Zindancık Bay is quieter on weekends compared to other bays. In Zindancık Bay, where there are only a few private properties, it is possible to swim in front of the houses. As long as you do not disturb the residents living here, you can arrive at the beach by passing through their houses. It is possible to arrive at Zindancık Bay by walking 5 minutes from Killik Bay. Across the bay, there is an island made up of cliffs that you can reach by swimming in 15-20 minutes. 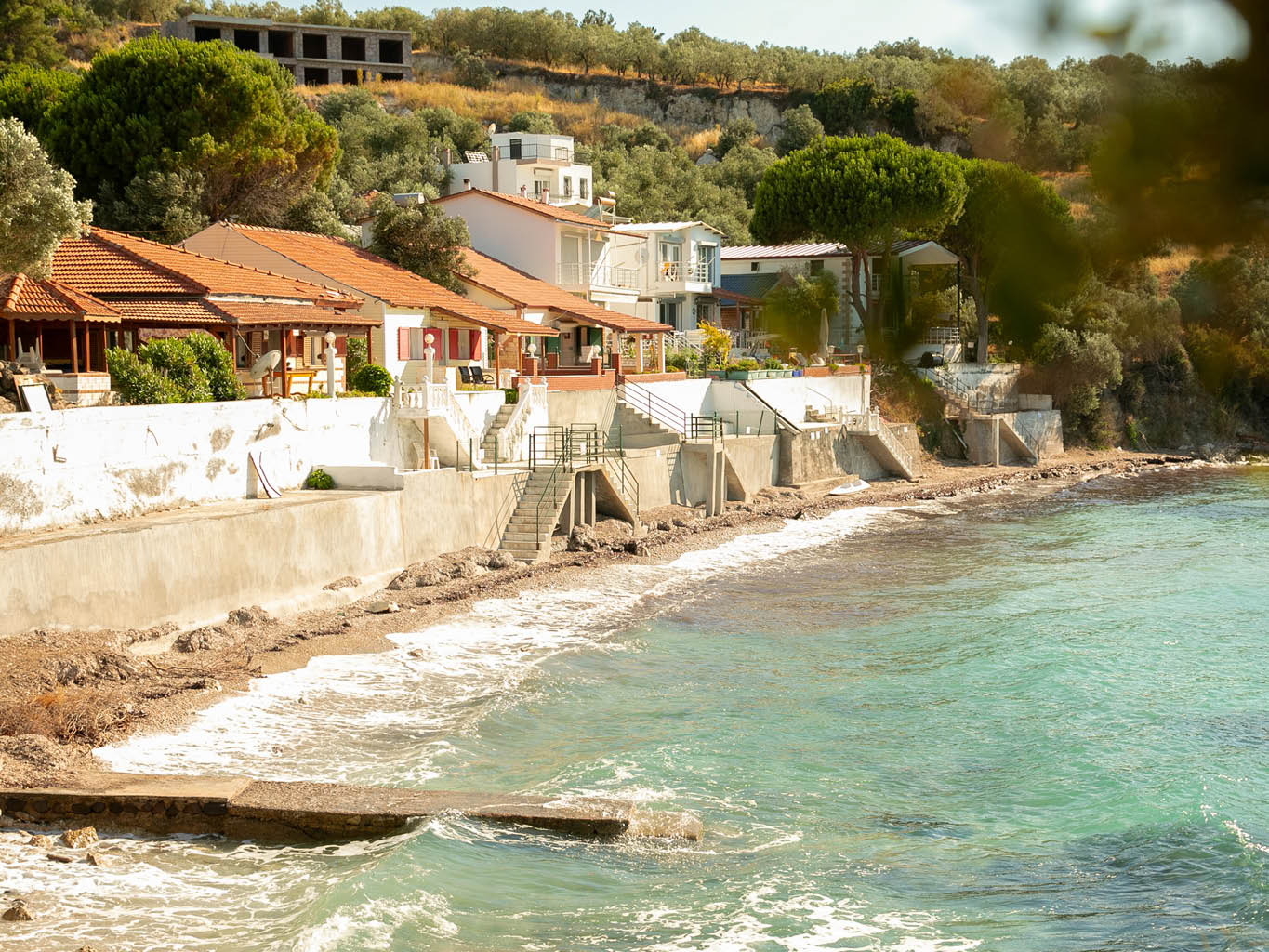