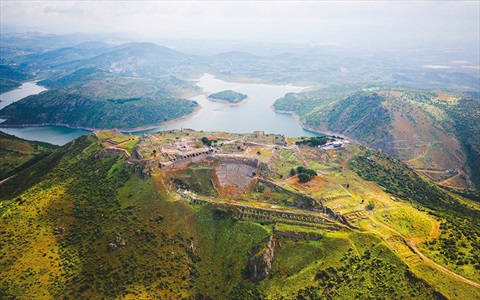 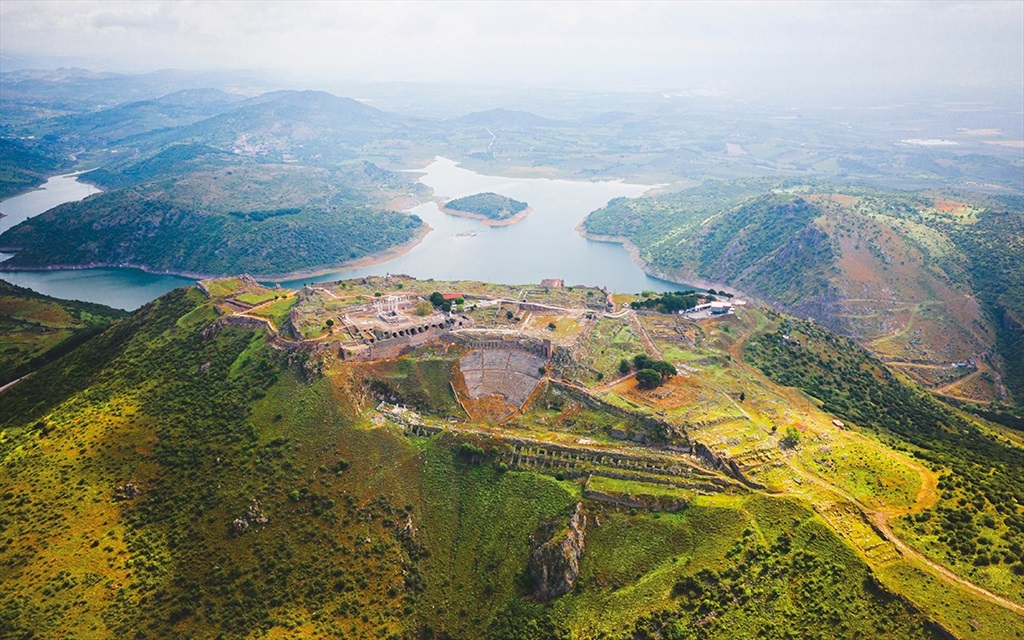 İzmir Heritage of the World

Blessed with a rich history and diverse cultural identity, İzmir lies in the cradle of civilisation, as we know it today. Izmir is a realm that contains everything beautiful, magnificent, impressive, surprising, confusing and rational, real and surreal…

A long list of cultural, historical and natural assets means that your visit to İzmir is bound to be memorable. İzmir is home to the ancient cities of Bergama (Pergamum) and Efes (Ephesus) - two cultural properties that are on UNESCO’s World Heritage List. Initiatives are in place to include three more tentatively listed sites in İzmir - namely the Historic Port City of Izmir, the Historic town of Birgi and the Gedi Delta - on the permanent list.

İzmir has plenty to offer to its visitors. Whether it be the remains of unique civilisations dating back thousands of years or breathtaking monumental art and architectural wonders; visitors can expect to find the intriguing story of a sophisticated culture that has maintained its originality. Located in a unique geography, İzmir is also a treasure trove of natural wonders from a stunning coastline with sandy beaches and turquoise seas, to charming slow cities and unspoilt rural villages across the pristine highlands and valleys. İzmir invites you to experience the most striking historic cities, walk down their columned promenades and imagine how the ancient people lived… İzmir promises the holiday of your lifetime, full of unforgettable memories.

In the UNESCO World Heritage List, Ephesus Ancient City, including Ephesus Ruins, the House of the Virgin Mary, Ayasuluk Hill and St. Jean Basilica, Cukurici Mound, has the title of Turkey's biggest open-air museum, is visited by nearly two million people every year. Ephesus, which has an extraordinary historical richness, includes the Great Theater, the largest open-air theater in the ancient world, the Temple of Artemis, one of the seven wonders of the ancient world, and the magnificent Celsus Library.

Ephesus, in the Selçuk district of İzmir, was one of the twelve cities of Ionia. The first settlement here is dated  back to the Neolithic Age.The excavation works carried out in the Çukuriçi Mound in recent years, revealed that the settlement date goes back to the 6th millennium B.C.E; that there was human settlement in the region during the Neolithic and Chalcolithic periods. The name of the city on Ayasuluk Hill was Apasas and it was the center of a state called Arzawa, a contemporary and contiguous of the Hittites, daminating a region which included a part of Ionia as well.

As Ephesus has changed places many times throughout history, its ruins are spread over a large area of 8 square kilometers. Ephesus was the port city where people immigrated from the Greek mainland started to live in 1050 BC. Later on they settled around the Temple of Artemis in 560 BC. The current city of Ephesus, which can be visited today, was established by Lysimakhos, one of the generals of Alexander the Great, in 300 BC. Ephesus lived its golden age during the Hellenistic and Roman periods and became one of the most populous cities of its age as the capital of the Asian state and the largest port city. Ephesus was the pioneering city of its era, especially in the fields of philosophy, science, culture and arts.

Pergamon is another cultural heritage site in Izmir that entered the UNESCO World Heritage List. Pergamon Acropolis was an important education center in the ancient world with its library building and the capital of the Kingdom of Pergamon. Besides, the acropolis hosts the steepest ancient theater in Anatolia and the first psychiatric hospital, Asklepion Health Center and Sanctuary.

Bergama, established on the ancient city of Pergamon, is one of the oldest settlement areas in the history of civilization with its archaeological remains dating back to the 7th century BC. Bergama (pergamon) is Turkey's thirteenth UNESCO World Heritage Site thanks to its historical and cultural values. Acropolis, which is the administrative center of Ancient Pergamon built on a hill overlooking the Bergama Plain, presents a unique view. The Temple of Athena, the Temple of Trajan, the Altar of Zeus, the theater for ten thousand people, the Temple of Bacchus, the Bergama Library in Bergama (pergamon) await visitors with all their magnificence.

The snake figure, which is the symbol of medicine and pharmacy, emerged from Bergama, where many firsts were experienced. The Asklepion, known to have been built in the 4th century BC and which have been written “death cannot enter” on its door, is famous for its healing waters, is located here. The Asklepion Health Center and Sanctuary, dating back its history to ancient times and dedicated to Asclepius, the god of health in mythology, has been an important therapy center for centuries. Here, the patients were treated by the sound of water and suggestion by walking the 650 meters long sacred road. It was recommended to drink the healing water and bathe in addition to this treatment. Galen, grown after Hippocrates of Kos, known as the father of medicine and the most important physician and pharmacist of the ancient world, is from Bergama and had his first medical education here. Galen, the palace physician of the Roman Empire, continued this duty between 161-166 CE.

İzmir is one of the most important port cities of the Mediterranean throughout history. It is the center where products, ideas and cultures meet and spread to the world by taking on a new meanings and contents. As a commercial and port city, it has been so since its establishment and has never lost this feature. It is the cradle of civilization that brings three continents: Europe, Asia and Africa together. It is the nodal point of the maritime trade routes connecting to the old world the Silk Road and Mediterranean, which has also carried culture and ideas as well as goods and wealth for thousands of years, and World's two oldest trade routes.

Kemeraltı, Kadifekale and Basmane regions, which are known as historical Izmir today, have a unique location where the city has gained the qualification of being a port city. This route starting from Konak Pier, which was built as an entrance gate to this historical port city in the 19th century and extending to Kadifekale, was included in the UNESCO Temporary Heritage List with its historical and architectural values. This area, where the Konak Square and the Historical Clock Tower and the prominent symbols of Izmir are located, have also the characteristic of being the oldest and largest open-air shopping center in the world with the Kemeraltı Bazaar, which expands over time with the filling of the inland port. As long as you walk along Anafartalar Street, the multicultural character of this historical port city where East and West meet is evident at every step. This historical city center, at the same time, Havra Street and its surroundings, which is the settlement area of Sephardic Jews who started immigrating to İzmir starting from the 16th century, hosts nine synagogues, four of which are back to back.

The Smyrna Agora, located right next to the Kemeraltı Bazaar, has starting excavation works today, contains one of the richest written and visual graffiti collections in the world, shedding light on the daily life of the Roman period. Excavation works continue in the Ancient Smyrna Theater, which the large part of it is underground, located on the foothills of Kadifekale. The theater, which will come to light with the works to be completed in the upcoming years, is estimated to be one of the largest amphitheaters in Anatolia. This route and Kemeralti, which ended with the castle built by Alexander the Great on Pagos Hill, continued to exist as a city center in the Republic period, and also continues to be the heart of Izmir today with the sounds, smells and stories it contains.

The Birgi Historical City has hosted numerous civilisations since antiquity. Birgi, one of the few cities in Western Anatolia managing to preserve its historical atmosphere, is viewed as a museum town and harbour s a number of architectural works dating back to the Beylik era, such as houses and mansions equipped with bay windows, mosques, tombs, bathhouses, religious schools, fountains, dervish lodges and many others. The Birgi Historical City was added to the UNESCO World Heritage Tentative List in 2012. The Aydınoğlu Mehmet Bey Mosque and Çakırağa Mansion are important buildings in the region.

Having two natural harbors, Foça is a town located on a low hill projecting into the sea in İzmir Province, on the Aegean coast. It was one of the most important centers among the twelve Ionian cities and hosted Persian, Macedonian, Genovian, and Ottoman civilizations. Genoese took over this castle from the Byzantines and rebuilt it. When Phokaia was conquered by the Ottomans in 1455, its walls were repaired and towers were added. Foça Fortress was included in the UNESCO World Heritage Tentative List in 2013.

Çeşme district is located to the west of İzmir province. Çeşme was referred to as the pier of Erythrai, one of the 12 Ionian cities in the ancient period.  After the second half of the 14th century, Çeşme became an important port of entry for trade between Chios and Anatolia. It is estimated that the Çeşme Castle was built by the Genoese before 1508 and after the Ottomans took over Çeşme, it is known that the castle was repaired and some additions were made to it. Çeşme Fortress was included in the UNESCO World Heritage Tentative List in 2020.

Çandarlı is a coastal town within the district of Dikili in İzmir. The area, where the Çandarlı Fortress was located, has been inhabited since the archaic period but the exact construction date of the fortress is not certain. The construction of the castle within its current plan and lines was carried out by the Genoese who captured Foça in the 14th century AD. Today, the fortress is quite well preserved in the form of a rectangle, with five towers, gutters, doors and walls. Çandarlı Fortress was included in the UNESCO World Heritage Tentative List in 2013.

The Gediz Delta is home to 299 bird species and , in the winter months is host to approximately 70.000 water birds. The Gediz Delta is one of the two major breeding grounds for flamingos in our country and the only area where flamingos can be found all year round. The Gediz Delta is one of the most important habitats in the world for a great many bird species, primarily the flamingo, Dalmatian pelican, and grey, and black stork. The Çamaltı Saltworks, located in the Delta, accounts for approximately one-third of all the salt procuced in Turkey. The Gediz Delta has a visitors’ centre, bird-watching platforms, and hiking trails. Projects on conserving the Gediz Delta for the future were launched in 2019 , and an application for World Heritage Listing was lodged with UNESCO.