Seferihisar is located to the south of Izmir and is a place where nature, history, and sea come together to promise peace to its visitors all year long. Seferihisar is the first "Slow City" (Cittaslow) of Turkey and the 121st in the world. The street lamps are solar-powered, local seeds are grown and nets are used instead of nylon bags in its market where local goods are sold. The restaurants of the district that offers very clean coasts offer the local delicacies unique to Seferihisar, and you can find homemade fresh and natural products in the market that is set up inside the Sığacık Castle every Sunday.

Sığacık is the place to start exploring Seferihisar

Sığacık was the northern port of Teos in the Antique era, and today it is a district that changed with the Teos Marina and hosts increasing numbers of visitors. Sığacık hosts world-famous Akkum and Ekmeksiz beaches with their glistening sands and clean sea and has many hotels and hostels. Even though the Sığacık Port is not a place to swim, the visitors can discover the Papaz Boğazı, Taş Ada, Azmak, Aktaşlı and Çamağız areas on daily boat tours.

Sığacık Bazaar, which is set at the narrow streets of the Sığacık Kaleiçi region on Sundays, is one of the most popular bazaars in Turkey. What differentiates it from the others is the fact that only products made in Seferihisar are sold here.

Historical places to see in Seferihisar

Teos antique site, which is located 5 kilometers to Seferihisar is one of the oldest and most important historical remains in the district. Teos was one of the 12 Ionian cities and was established by the Achaean General Athamas around 1080 B.C.

Kasım Çelebi Madrasa, which is thought to be built in the 15th century, and City Memory Museum and House of Memories are the two other destinations for history enthusiasts. 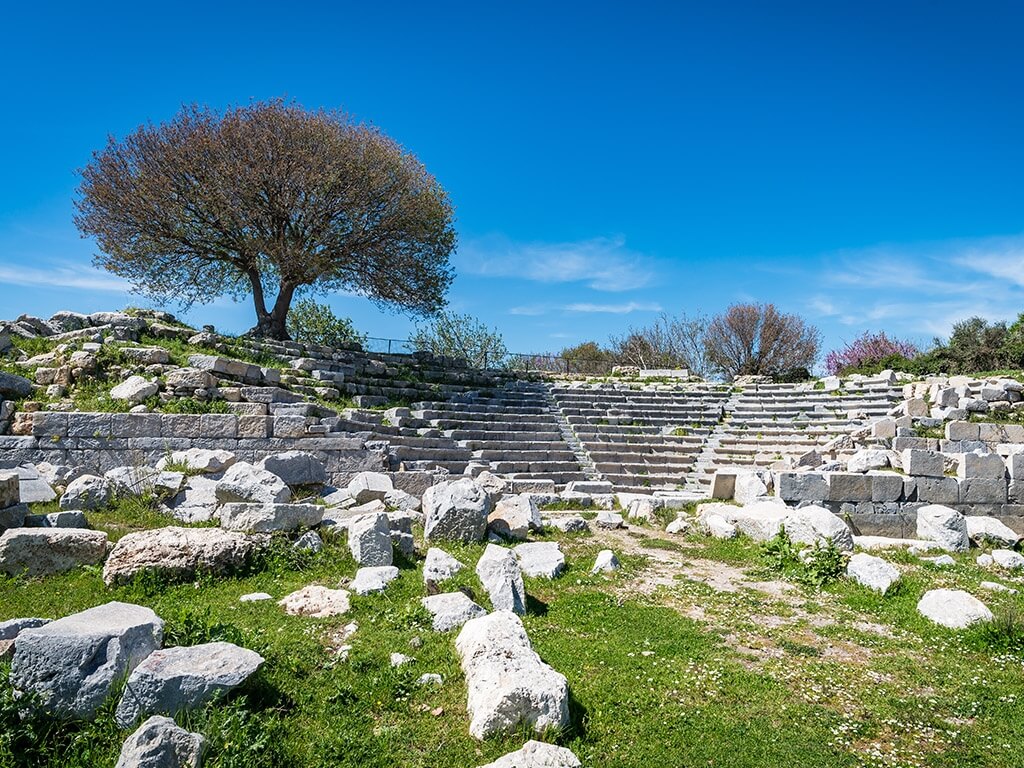 As the district with the longest coastline in Turkey, Seferihisar has, of course, many diving spots. North of Ekmeksiz Beach (Sığacık), there is a 17 meters long sunken fisherman's boat at 33 m depth waiting for scuba divers.

Seferihisar, the Tangerine capital of Turkey, celebrates the beginning of the tangerine season with Tangerine Festival, that exhibits products made from tangerine is held each year in November. Even though it’s not a regular tourism season, if you happen to be in the area during that period, we suggest you attend this colorful festival.

If you are interested in the history of the region, we recommend you to start by visiting the Ancient City of Teos. The most important building you will see in the city, which was founded by the Cretans and later settled by the Ionians, will be the Temple of Dionysus, built in the name of Teos' patron god. In addition, you can see many historical structures such as the harbor, the ancient theater, and the Agora Temple. Another historical building you will want to see is the Kasım Çelebi Madrasah, which is located in Düzce Village and was built in the 15th century. The L-shaped madrasah draws attention with its architecture and we can say that it has been well preserved. The Seferihisar Ulu Mosque, which was built during the Ottomans, is also worth seeing. Information about the recent history of the district can be obtained from the documents and objects exhibited in the Museum of Memory of the City, built by Hamza Efendi in 1929. Sığacık Village and Sığacık Castle are other popular places in the district. Sığacık Castle, located in this village which looks like a movie set, has been well preserved. Some of the historic houses in the castle have been restored and started to serve as hostels and cafés.

If you're here in the summer, we say don't go back without enjoying the sea and the sand at the blue flag beaches. If you’re into diving, there are many beautiful spots where you can do scuba diving or snorkeling, including a sunken fishing boat. You can take photos of the narrow streets and historical buildings in Sığacık, visit the Seferihisar Bazaar established in the castle and see the handicrafts made by the locals, and sip your tea at sunset in Teos Marina. Your vacation would be even better if you come across the Tangerine Festival, which is a fun event with many activities including the selection of the king and the queen of tangerine!