An Ionian civilization in the Ancient Era, Foça was called Phokaia for the Mediterranean monk seals that lived in its waters and this name reached our present day in the form of Foça. Included in Homeros’s Odysseia, Foça is a place frequented by both foreign and domestic tourists. In Foça day trips can be made on boats to visit the islands and coves or the historical sites.

Foca is one of the places where you can enjoy the sea to the fullest. Wherever you stay in the district, you can be sure that there is a wonderful beach nearby waiting for you. After a few days spent in Marsinaki bays and the other Foça beaches you should definitely explore, you won’t want to leave Foça.

Foça, which has been home to many civilizations throughout history, is a treasure worth exploring for history and archeology enthusiasts. Even though The Castle and City Walls, which was built to protect the city, have been partially destroyed, they are still present and greeting their visitors. The Fatih Mosque is one of the most important buildings of the Turkish period in the district and is still in use. Athena Temple, Cybele Open-Air Temple, and Kayalar Mosque are other places ​​that reflect the history of the district. 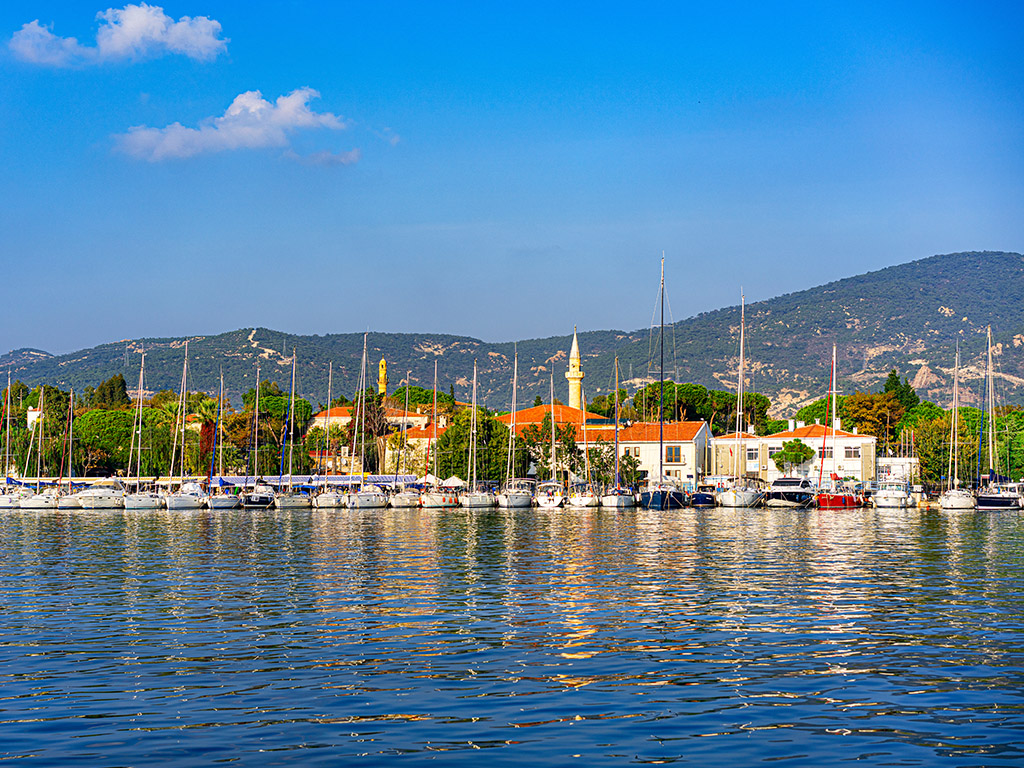 Foça is one of those places that fascinate you with its natural beauties. The Siren Rocks mentioned in Homer's Odysseia are here. Siren Rocks are also mentioned in Greek mythology; it was believed that their bodies were bird-shaped and their heads were like the heads of women. It was strongly believed that they caught the attention of people to the rocks with their music and sailors who were attracted by the music lost their ways, crashed the rocks and sank. The Rocks which have volcanic structures have eroded throughout the centuries and transformed into supernatural shapes.

There are 6 uninhabited islands called Orak, İncir, Fener, Atatürk, Kartdere, and Metelik across from Foça. On the island of Orak, there is a long pebble beach on the south shore; Orak, Atatürk, and Kartdere have steep cliffs reaching 80 m in height. The islands are generally covered in weeds, brush, and scrubs. There is a small pine forest on the northern shore of İncir Island and an area covered in cactus on Fener Island.

If you want to see more than one bay during the day, you can take a boat trip.

You should try herbs, fish, and other seafood, the indispensable ingredients of Foça cuisine.

You can go to Kozbeyli Village which impresses its visitors with its authentic structure, and you can drink the famous mortar ground coffee.

Eski Foça (meaning Old Foça in Turkish) is one of the most peaceful holiday towns with picturesque fishing boats along the coast, flower-lined streets adorned with stone houses, a blue flag beach, and the most famous sunset. Yeni Foça (meaning New Foça in Turkish), on the other hand, is a recently developed part of the district and the settlement is mostly in summer. The places to visit in Eski Foça, which was one of the most important settlements of the ancient Ionia include Beşkapılar Castle and City Walls, Eski Foça Port, Athena Temple, Cybele Open Air Temple, Kayalar Mosque, Fatih Mosque, Devil Bath, and The Windmills. Orak Island, İncir (Fig) Island and the Siren Rocks where Mediterranean monk seals live are as popular and worthy to see as the beaches of the region. Kozbeyli Village is another destination that we think will impress you with its authentic structure and cuteness. It’s also an ideal place for those who want to have a rich and delicious village breakfast.

You can take beautiful photos in the colorful and unique narrow streets of Foça and its shore decorated with fishing boats. Not to mention the fascinating sunset! You can visit many small and large islands such as Orak Island and İncir Island with daily boat tours and if you are lucky, you can see the rare Mediterranean monk seals in Siren Rocks. İncir Island also has a small camping area with a capacity of 20 tents. You can camp at this part of the island which is covered with pine trees and you can taste delicious food in the country restaurants. In the summer, you can enjoy the crystal clear waters of the Aegean at the unique bays of Mersinaki bays Eski Foça and Yeni Foça.